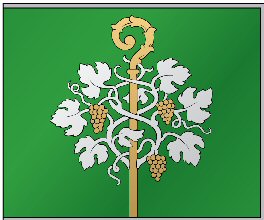 The flag of the town of Alsedžiai in Plunge district, Telsiai county, Lithuania, is at <commons.wikimedia.org>.
Alsedziai town is located in Plunge district in Telsiai county, Lithuania. It has population of 956 and is the center of Alsedziai eldership (seniunija) which has 1,500 inhabitants.
From  <samogitia.mch.mii.lt>: "Alsedziai, town in the province of Zemaitija (Samogitia) at the confluence of the tributary Sruoja and the Varduva river, 13 km Northwest of Telsiai. The population was 1,043 in 1959 (60 in 1860; 1,102 in 1903; and 1,049 in 1923). The town has a secondary school, library, twenty-five-bed hospital, and ceramic works. 5 km to the south is a lake by the same name (area, 80 ha; depth, 2,5 m), and a forest stretches to the Southeast. The region is hilly and scenic.
The town of Alsedziai is first mentioned in historical chronicles in 1253, but it is known that a settlement existed on this location from a much earlier time. Archaeological discoveries on the territory of the town include a bone dagger from the Mesolithic period. After the founding of the Diocese of Samogitia, with it’s center at Medininkai, Vytautas the Great assigned Alsedziai and a wide surrounding area to the bishop as a fief in 1421. With time the bishopric’s holdings decreased in size, but as late as 1778 they still encompassed the town of Alsedziai and Lieplauke, and approximately 9,240 ha of land with 234 peasants and their holdings.
The wooden Church of the Immaculate Conception, the first church of this name in Lithuania, was built in 1476. From then until the middle of the 19th century Alsedziai was a favorite residence of the bishops of Samogitia. In the 16th century it was the home of one of the most notable Lithuanian bishops, Merkelis Giedraitis, known as the Apostle of Samogitia. The last bishop to live in Alsedziai was Bishop-Elect John Gentila, who headed the diocese from 1844-50. He had collected a library of about 20,000 volumes there; at the time this was one of the largest and best private libraries in Lithuania. Bishop Motiejus Valancius, who became head of the diocese on 1850, chose not to reside in Alsedziai.
Under the Republic of Lithuania, Alsedziai became the township seat and belonged to the country of Telsiai. The township comprised 60 hamlets with 1,117 homesteads and 6,362 inhabitants. After World War II, Soviet occupation authorities assigned Alsedziai to the district of Plunge and made it the administrative center of the local collective farm."
Valentin Poposki, 6 March and 11 June 2007

Alsedziai - on a green field a golden bishop's staff entwined with a silver vine having golden grapes.
Flag proportions 5:6, free edges bordered with a narrow silver stripe, finial is a golden knob with two rings.
The charge reminds that Alsedziai was the summer residence of the bishops of Samogitia for almost 400 years. Also it symbolizes the spiritual values of the local people. The green field symbolizes both hope and beauty of local nature.
Virginijus Misiunas, 28 February 2010