At the Railway Museum in Vilnius, there is the flag (see third picture). The logo can be seen at <www.litrail.lt>.
Jan Mertens, 23 August 2003 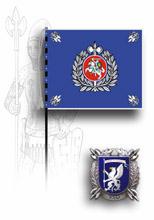 From <www.vsd.lt>: "The State Security Department (SSD) of the Republic of Lithuania is a state institution accountable to the Seimas (Parliament) and the President, charged with the protection of the sovereignty of the Republic of Lithuania and its constitutional system.
The role of the Department is to identify activities which constitute a threat to the security of the state, its territorial inviolability and integrity, the interests of the state, and its economic and defence potential. The SSD fights against such activities and investigates the causes of their appearance and conditions, with means provided by the law."
Anon., 31 July 2003

Translated rom <www.vsd.lt>: The flag of SSD - The blue cloth, edging with silver fringe on three sides. The blue color symbolizes loyalty, strength, and honesty. The front of the flag is charged with halberd and coat of arms of the Republic of Lithuania, on oval shield. The halberd is the weapon of infantry, which is known since 14th century. Since 16th century infantry with halberds cared about protection of palaces and cities. The coat of arms is girted by two laurel branches. The flag is framed with two parallel silver narrow bands, which corners are charged with halberds, oriented to centre. The back side of the flag is same but centre of the flag is charged with silver griffin standing on his hind legs and holding the banner. The banner is charged with red motto in Latin Patria et veritas (Homeland and Verity). The griffin symbolizes  the eagle's vigilance and lion's strength and haughtiness. The image of griffin is often associated with Christ: the eagle is an incarnation of heaven (divine) first, lion is an incarnation of earth (human) first. Author - A. Klisevicius. The flag is confirmed by Lithuanian Heraldry Commission on October 21, 1998.
Anon., 14 August 2003

The flag at <www.vpgt.lt/~mindaugas> is the flag of the Fire-Prevention and Rescue Department (subdivision under the Mininstry of the Interior of the Republic of Lithuania).
Anon., 31 July 2003