The flag of the Lithuanian Booksmuglers Society can be seen at <www.spaudos.lt/>.
Anon., 6 October 2003 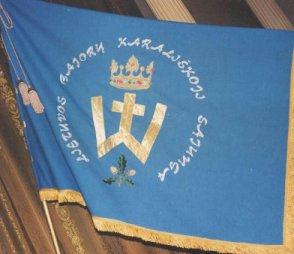 The flag of the Royal Lithuanian Nobility Association is at at <www.bajorusajunga.lt>: ""Association" is juridical person, have its seal, flag and other symbolic" is affirmed in the statute of LBKS, in the first congress of LBKS and in the common regulations. The statute of LBKS was adopted on April 23, 1994 at the first LBKS congress. The flag of LBKS is sky-blue colour, 1,5x1 m in size fabric with the gold edges. The gold royal crown and the sign (turned over letter M with small cross above) of king Mindaugas are embroidered in the centre of flag. The circle, consisted of silver written letters "LIETUVOS BAJORØ KARALIĐKOJI SŔJUNGA" (Royal Lithuanian Nobility Association), three oak leaves and two acorns surround these two elements: flag and crown.
The author and the painter of project is sculptor professor Dr. Konstantinas Bogdanas; the embroidering is made by folks artist, teacher Virginija Kasperavičiűtë.
Description by author Dr. Konstantinas Bogdanas. Translated by A.Musteikiene."
The flag is related to the Association's arms on <www.bajorusajunga.lt/LBKSarms.html>.
Jan Mertens, 30 July 2003 and Anon., 31 July 2003