From <www.af.mil.lv>:
"NAF AF flag is the symbol of unity for Latvian Air Force. Air force motto is “Everything for Latvia” that is maintained from independent Latvian military aviation and sewn into Air Force flag. The size of AF flag is 100 cm x 160 cm and background is of light blue colour.
The front upper side of AF flag bears a yellow inscription of 10 cm high letters “AIR FORCE”. In the middle of the flag – there is the symbol of Defence forces sewn in respective colours: on the sunbeams there is a sword positioned askew over it, in the centre there is a shield with the colours of the State flag on which there are 3 yellow pentagonal stars placed, that symbolize 3 regions of Latvia. Each corner of flag bears AF aviation membership signs sewn in yellow colour – stylised wings of birds and between them there is a propeller in vertical position placed. On the bottom side of the flag, under the Defence forces symbol, there is “1992” sewn in with 10 cm high numbers – the year of Latvian Air Force renewal because in February, 1992 there was Air and Air Defence administration formed, but June 17, 1992 is the anniversary of renewed Air Force.
The reverse of AF flag, the central image is formed by the symbol of AF aviators badge – an eagle in silver colour bringing the State flag of Latvia. Above the eagle there are 3 stars sewn in yellow traditionally symbolizing 3 regions of Latvia. The bottom side of flag  - with 10 cm high letters the motto of Air Force “Everything for Latvia” is sewn in semicircle. Each corner of the flag bears an inscription of bird’s flight in yellow colour.
On the free sides of the flag there are 10 cm long yellow fringes. The flag image and inscriptions on both sides are sewn on satin cloth with threads of yellow, white, carmine, black and metal colours.
On June 17, 1997 on the 5th anniversary of Air Force, the president of holding company Riga Airlines Maris Karklin? solemnly handed renewed AF flag to NAF AF commander colonel Karlis Kins. In the flourish of trumpets of flag presentation NAF Navy padre Viesturs Kalnin? consecrated it.
AF flag is kept in AF base in Lielvarde and during ceremonies according to the order of AF commander is handed to standard-bearer and to his 2 assistants."
Talis Tomass, 3 March 2006

According to Album 2000 [pay00] - Aircraft Marking - Red-white-red roundel, the red being the particular Latvian red shade, and the white being "thinner" then the other two. Note explains that the national flag is painted on the fin. [cos98] explains that this is so since 1992. The aircraft markings of Latvian aircrafts was entirely different before the Soviet era. At first RWR stripes (of normal red and of equal width) were painted on the wings and on fin, soon replaced with red swastika rotated 45deg usually on white disk. The National Guard (paramilitary units) red outlined used white disk with red indented cross in 1937-1940, and Navy used 1936-1940 black rotated swastika and black cabled anchor on the fin. In years 1941-44 Latvian aircrafts in German service used a black Latin cross was painted on white pannels, with black swastika on the fin.
Željko Heimer, 8 April 2002

Formed in 1919, and folowing a brief period of using national colors wingtips and rudder stripes, the Latvian air force adopted a swastika (red according to [cos98] but it should ne maroon) on white disc.According to Insignia, there were variants of those markings such as wing marking of swastika on white plate (<latjunk.jpg>) or no white background at all (<latdh9a.jpg>), however those were probably at the begining, later to be standartized as in <www.dalnet.se/~surfcity> and <www.insigniamag.com> . The image in our site (1918-1940) should be maroon.
[cos98] show another markinks for National Guard, 1937-1940 (again should be maroon). This markings can be seen at Insignia: "The later style of Aizsargu Aviacija (Latvian National Guard Aviation Branch) markings with a simplified Auskelis cross in Dark Red on a White disc are used in six positions". It don't show the ring around it as in [cos98] image.
Insignia also show a former markinks of the National Guard as: "This aircraft used a marking basedon a traditional Latvian ornament, the Auskelis, which was a Dark Red and White cross with swallow-tail tips. This was then superimposed onto a Latvian military Jack in Dark Red and White". There is no word about those marking in [cos98]. Aizsargu Aviacija was formed in 1931 and dissolved in1940.
You can read at Insignia about "Latvian Air Force 1918-40" and "Early Latvian Aircraft".
[cos98] reports also about Navy markings 1936-1940 (Naval air arm formed1923 and dissolved 1936) as black swastika with no background and anchor on rudder. Insignia show the swastikas in maroon as seen in the article "Latvian Naval Aviation 1936".
[cos98] reports that Latvian unit attached to the Luftwaffe used black cross on white plate (1941-1944) with rudder markinks of black swastika on square white plate.
The new Latvijas Gaisa Spéki was established in 1992 and since then it is using a maroon-white-maroon roundel. [cos98] show a very thin white ring. It is thiner but not as much as reported there and above. National flag used as fin flash. See <www.insigniamag.com>.
Air forec reserves are using another markings (Army Reserve, 1994-) but with wider borders and in maroon as seen at <www.insigniamag.com>.
More info at <www.scramble.nl>.
Some photos:
Air forec reserves - <www.airliners.net/496093> and <www.airliners.net/495830>.
Air force - <www.airliners.net/332748>.
SAR helicopters - <www.airliners.net/106107> (and see also <www.insigniamag.com> ).
Dov Gutterman, 20 June 2004 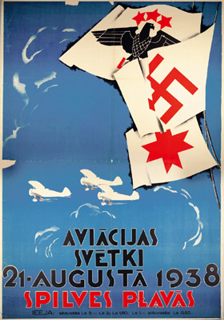 Interesting photo of the Latvian Air Force poster from aviation festival of 1938 at http://propagandahistory.ru/1666/Latyshskie-plakaty-do-1940-g-/
We see three air force flags. All three are white.
The first one with the eagle and stars (looks like modern AF flag.
Second one - with swastika
Third - with cross (National Guard)
Victor Lomantsov, 20 March 2016

The proper file of the poster is located here
There are three flags in that poster: from what I can infer, as you already mentioend, the first flag (from top to bottom) being the flag with black eagle and three red stars is the flag of the Latvian Air Force (WWII-era); the second one which is the red swastika is the roundel and the third one being the red cross is the National Guard roundel. This forum also mentions the red cross as being the roundel for the National Guard (Zemessardze, ZS) (official websites: http://www.zs.mil.lv/and http://www.zemessardze.lv/) so I believe that's a match.
The different markings and roundels have already been explained by Dov Gutterman in his entry on June 20, 2004.
In fact, one can also see other posters from the same website showing the red swastika as well:
- http://propagandahistory.ru/pics/2014/03/1395416964_bc2b.png
- http://propagandahistory.ru/pics/2014/03/1395415890_2ed4.jpg
By the way, even though the Latvian Air Force (Latvijas Gaisa spēki in Latvian, official website) is already featured, here's the full official explanation of its current flag with pictures of the obverse and reverse of the Standard (flag).
Esteban Rivera, 22 March 2016