The municipality of Herceg Novi (33,034 inhabitants in 2005; 12,739 inhabitants in the town of Herceg Novi proper; 235 sq. km) is located between the highest mountain of the Dinara massif, Orjen (1,895 m asl), and the entrance of the Bay of Kotor.
Evidence of humans living in Herceg Novi dates from its first known inhabitants, the Illyrians. Commercial opportunities attracted Greek traders in the 5th century BC. In the 3rd century AD, the Romans defeated the Illyrians and took over this region. After the fall of the Western Roman Empire, in 476, Byzantium ruled for the next six centuries. In the 7th century, Slavic tribes densely inhabited this region. The Serbian Nemanjić family ruled the area upon the death of Czar Dušan, Dračevica was governed by Duke Vojislav Vojinović, and later on by the Balšić family.

The town of Herceg Novi was founded in 1382, by the Bosnian Ban (provincial lord) King Tvrtko I Kotromanić in the Bay of Topla, with an intent to give it a commercial, maritime and craft role, and named it Sveti Stefan (St. Stephen). As one the youngest cities on the Adriatic coast, it was called Novi (New), Castrum Novum, Castel Nuovo. Its current name was coined during the reign of Herceg (Duke) Stjepan Vukčić Kosača, when the town experienced its greatest progress. The area was occupied by the Venetians, the Turks, the Spaniards, the Austro-Hungarians, the Spaniards again, the Italians, the French, the Germans...
Tourism in the area dates back to the 19th century as testified by Simo Matavulj's records on the Šjora Roza's Inn. The Coffee House "Bellavista", owned by Savo Bažanović's family, with 25 beds for "foreigners" was mentioned for the first time in 1872, while the first hotel was bulit in 1909.

The region of Herceg Novi was given to the Ottoman Turks by the Republik of Dubrovnik at some point, just as was the area around Neum, in the north of Dubrovnik - as a buffer zone to isolate Dubrovnik territory from that of Venice. These two strips of land eventually became parts of Bosnia and Herzegovina and in time occupied by Austria-Hungary. The historical borders were retained until the reorganization of the Kingdom of Serbs, Croats and Slovenes into Banates, and reverted after the Second World War - however, the correction of the Bosnia and Herzegovina border to the benefit of Montenegro was made when the borders were finally established (in 1947?) - so Herceg Novi became a Montenegrin town.

The flag (photos, photo) and arms of Novi Herceg are prescribed in Article 6 of the Municipal Statutes (text) as follows:
The coat of arms of the municipality consists of a blue heraldic triangular shield on which is a silver stone-walled tower with a parapet

After a decade of using its emblem, Herceg Novi finally received new city symbols - a coat of arms and a flag, which was put up on the city’s Clock Tower Tora.
As the Mayor of Herceg Novi, Stevan Katić, said at the ceremony, the new symbols have a historical foundation and represent a specific cultural heritage created for centuries. He emphasized that the symbols are in step with the efforts of the local government to present Herceg Novi in ​​a recognizable way, which will correspond to its uniqueness, reports Radio Jadran.

"The new coat of arms and flag are elements of the common past and present of Herceg Novi. I hope that the citizens of Herceg Novi will be able to understand the exact meaning of the symbols and that they will bind them to the city and each other. This flag will be put up on the Tora Clock Tower, after that at the fort and numerous establishments throughout the city. The flag, along with the coat of arms, will tour the world representing our city. By emphasizing them today, Herceg Novi celebrates its wealth, heritage, honesty, wisdom, peace, strength and daring," he said.
[...]
[Total Montenegro News, 27 October 2019]

Clock Tower Tora is the central charge on the shield of arms, placed between two spears. Initial proposal (description) has had the tower placed between two fleurs-de-lis, reminding of king Stjepan Tvrtko I of Bosnia, the founder of the town. Before the adoption of symbols, these were changed into the spears (no explanation can currently be found). The author of both original and final designs is Srđan Marlović, architect from Herceg Novi.
[Novosti, 28 March 2016; Kurir, 28 March 2016] 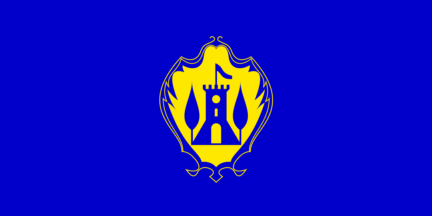 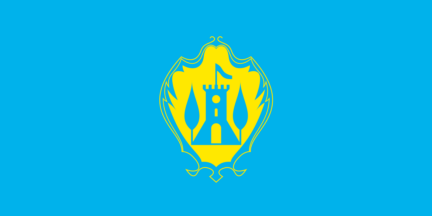 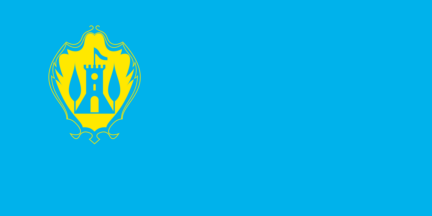 Former flag of Herceg Novi, as prescribed in the Municipal Statutes - Image by Tomislav Šipek, 26 August 2015

The symbols of Herceg Novi are prescribed in Article 8 of the Municipal Statutes Statutes Opštine Herceg-Novi (text), as follows:

The flag is rectangular in shape, in length at least twice the height, light blue with the coat of arms, of yellow color, in the top left corner.
The shape of the coat of arms is an oval frame of leaf elements, inside which is the symbol of a stylized clock, a tower with a flag at the top between two cypresses.
The shield and the symbol of the town are yellow on a white background. Below the Clock Tower the name of the town is inscribed in Cyrillic letters.

The coat of arms was, undoubtedly, designed after the seal of the town, dated 1865. The writing on the seal's rim reads "Opština Herceg Novska - Boka Kotorska", recalling the location of the town at the entrance of the Bay of Kotor.
The fortress depicted on the coat of arms must be the Clock Tower, described as follows (municipal website):

Sahat kula (Tora, that is, the Clock Tower), was built in 1667 on the order of Sultan Mahmud. During the Turkish rule, this was the main gate of the town. There is a sculpture of Madonna in its arcade (called the "Black Madonna", since it was made as a bas-relief by Afran Hozić; from Sarajevo, in burnt wood in remembrance of the founder of the town, Tvrtko I Kotromanić).
The clock on the tower was replaced by an electric one only in 1995, given by the town of Zemun.

Herceg Novi is the home of PVK Jadran twebsite), founded in 1926. The oldest water polo club in former Yugoslavia, PVK Jadran won the national title in 1958 and 1959, both times with no game lost, and, subsequently, three more national titles and two national cups.
The flag of PVK Jadran (photos, photo), part of the club's emblem, is a white burgee bordered yellow, quartered by a blue cross and with a red canton charged with a white "J".