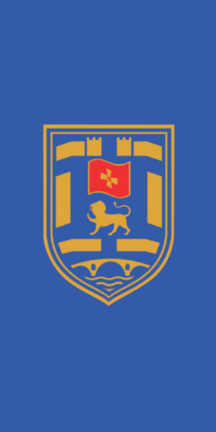 Flag of Nikšić, horizontal and vertical versions - Images by Tomislav Šipek, 24 May 2018

The municipality of Nikšić (75,282 inhabitants on 2003; 58,212 inhabitants in the town of Nikšić proper) is located in the densely populated fertile plain called Župa.

The old town Onogost was founded in the 4th century as a Roman military fortification, on the crossroads of important roads linking the neighboring territories. The settlement was situated on the rocky hill in the plain between Studenacke glavice and Trebjesa, and was preserved through the three great periods of the human civilization. It survived as the Roman fortress, then as an object in the system of defense in the medieval period, as the center of Župa in the period of flourishing of the Serbian Empire and, finally, as a Turkish fortification. The Gothic Anagastum and the medieval Onogost was an active fortress from its foundation to the departure of its last conquerors.
The liberation from the Turks in 1877 boosted the desire for a new town, besides the "old and rotten" Turkish provincial town. This wish was fulfilled with the release of the first regulation plan in 1883, which prescribed the formation of the solid urban structure, by the application of the Renaissance and Baroque scheme of the ideal towns. Engineer Josip Slade drafted the plan, at the demand of King Nikola.
After the two World Wars, Nikšić has grown ten times bigger and it has become one of the industrial centers of Montenegro, as well as an important center of cultural and artistic creativity and the seat of numerous educational institutions.

The coat of arms is described in Article 5 of the Municipal Statutes Statut Opštine Nikšić (text), adopted on 18 June 2004, as follows:

The coat of Arms represents a harmonious whole on the basis of the shape of a medieval shield in dark blue with a double rim in gold, on which is engraved in the central part an architectural view of Liberty Square, with the towers that symbolize the Bastion in the top part of the shield, and, in its lower part, the bridge over river Moštanica. At the central part of the representation of Liberty Square is the flag from Vučji Do, below which is located a lion. The architectural view of Liberty Square with the towers symbolizing the Bastion, the bridge over river Moštanica, and the lion are in gold, while the flag from from Vučji Do is in red and gold. 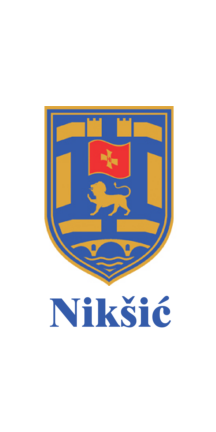 The former flag of Nikšić, as communicated by Mr. Milan Cerović, from the DiS company, manufacturer of the flag, was white with a golden border and the municipal coat of arms in the middle.
The vertical version of the flag has the name of the municipality, written in Latin script, near the bottom of the flag.