About the imaginary Republic of North Mexico

In May I visited numismatic exhibition in State Hermitage, St.Petersburg, and I saw interesting coin of "North Mexico" with depiction of a yellow-field flag with saltire and a star. What is it?, US New Mexico?
Victor Lomantsov, 21 June 2017 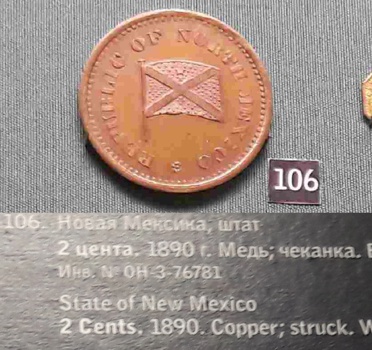 According Roberto Calleja P.D. via Luis Hayas, the coin on bronze of 2 cents dated 1890, is a sporious coin created withouth decree neither any law supporting it. In the anverse the inscription is in English and in reverse say "In God We Trust 2 cents 1890". In his opinion, the coin was created by a pro-american political group, but the Republic of North Mexico was no probably a real existence even if he has not too much information about opposition to Porfitio Díaz government in the period 1886-1890. (published in Flag Report #12, 1 october 1999)
Jaume Ollé, 21 June 2017

Doing a quick search online, I came across a mention of the planned Republic of North Mexico in an article written in The New-Yorker in 1839. I was able to read the article online through Google Books at The New Yorker of Saturday February 1, 1840 though I don't know if it'll work for anyone else. I have transcribed the article below in case it can't be read online.

PROJECTED INVASION OF TEXAS BY MEXICO

We copy from the 'Cosmopolita' of the 4th of December, a paper published in Mexico, the following communication from Seńor Almonte, the Secretary at War, to the National Congress. He asks that extraordinary powers be granted to the President for a military expedition against Texas; and that he be authorised to use politico-military measures for the reduction of that Republic, as well as in reference to the bordering States. The Editor of the 'Cosmopolita' remarks that these extraordinary powers might ultimately compromise the relations of Mexico with friendly nations.

"The Supreme Government has resolved to prepare another expedition, and to offer to the usurpers of Texas, peace or war, pardon or punishment, and at every hazard, to compel them to return to the bosom of the Mexican family. The President earnestly desires the cooperation of the Congress for this patriotic object, by giving him the extraordinary powers which are requisite for its accomplishment.

"The Government and every citizen of Mexico with to prove to their enemies, their determination and their power to sustain the rights of the country. The criminal adventurers of Texas have committed acts which merit the severest punishment. Their views have extended beyond what was expected; and now the whole Mexican nation, desirous of promoting the internal tranquility of the State, demands a guarantee for this repose in external security.

"To Texas we must chiefly direct our attention. Its perfidious inhabitants seek to promote their fortunes by the ruin of Mexico. The fertile and beautiful lands of that province have excited their cupidity. These must be recovered at every risk. With this view, the President, with the advice of his council, has directed me to submit to Congress the following measures:

"1. That the Government be authorised to incur any expense for the reduction of the department of Texas to the National Union.

"2. That all politico-military measures by authorised, with respect to this province and its limitrophe States, that may be deemed necessary to effect its pacification."

The Mexican journals assert that the scheme of the Texans is to support the Federalist party in Mexico, and to encourage the separation of the States. A new Republic is proposed to be established by the Federalists, to be called the Republic of North Mexico. It will comprise the departments of Tamaulipas, Racatecas, Durango, Sinalos, Seńora Nuevo Leon, Coahuila, Nuevo Mexico, and the Californias. [Globe.]

Based on that article, it would seem to indicate that the Republic of North Mexico was a dream that never came to fruition, though apparently a flag was created and coinage produced.
Randy Young, 21 June 2017

Anything below this line was not added by the editor of this page.