The Presidential flag of Mozambique is a red field (2:3 proportion) with the coat of arms centered and fimbriated in white. The interior part of the arms shows a map of the country bordered by water (the Indian Ocean) at the bottom. An open book symbolizes the desire to educate the people of the nation. The rifle and hoe represent defense of the country and agriculture, respectively. All of this is lightened by the sun - the dawn of a new day for an independent Mozambique. This scene is framed by the cogwheel of industry. The entire arms is surrounded on one side by sugarcane and the other by corn sheaves. At the top is a red star for the spirit of the Mozambican revolution while the lower red ribbon has the name of the nation inscribed upon it."
Sources: Smith, Flags and Arms across the World (1980) [smi80] ; Talocci, Guide to the Flags of the World (1982 ed.) [tal82]; Crampton, The Complete Guide to Flags (1989) [cra89].
I am not sure if the arms have changed since the flag was adopted around 25 June 1975 (when the 1975 flag was adopted).
Paige Herring, 07 May 1998.

President of the Republic. 3:4
Red flag with white disk containing the national coat of arms in the middle. The disk diameter seems to be 1/2 the hoist. Large golden fringe on three sides. At FOTW there is Paige Herring's image of the presidential flag, ratio 2:3 (and without the inscription in the red ribbon visible). This is presumably the flag as adopted in 1975 (and as shown by several authors as indicated on FOTW). At one time the ratio is, apparently changed to 3:4, possibly at the same time when the inscription on the Coat of Arms was changed in 1990 from "Republica Popular de Moçambique" to "Republica de Moçambique".
Zeljko Heimer, 01 Jul 2002 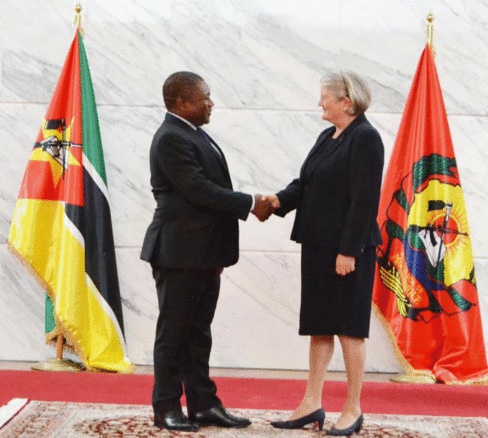 This photograph showing the Presidential flag of Mozambique was taken on 28 August 2019 and posted on Facebook shows the coat of arms placed directly on the red field.  The arms are also larger than that which is shown on our original image above.
Nozomi Kariyasu, 06 Nov 2019