The first formal policing in the country was done by the German "Kaiserliche Schutztruppe" as part of their overall responsibilities. However on 1st March 1905 the first police force was established in the form of the "Kaiserliche Landespolizei fur Deutsch Südwestafrika". During 1907 this force reached an establishment of 400 members and during the same year it took delivery of its first motor vehicle. However, the horse and camel remains for years the standard means of transport. Camels were mostly used at places like Stampriet, Tsinsabis and Witdraai. The last camels was withdrawn from service just after the Second World War.

The period of policing by the "Landespolizei" ceased with the South African invasion during the First World War, where after policing again fells within a military formation. Five regiments of the South African Mounted Rifleman stayed in the country on garrison and policing duties after the withdrawal of the South African Main Force. In the meantime the recruiting of a military police force commenced in Bloemfontein (South Africa) and during February 1916, the new force took over the policing function with 52 officers and 1100 other ranks  Also during 1916 a Training Centre with 16 instructors was established for training of the members who were mostly young and inexperienced. They were subjected to a five months intensive training course. The Training Centre also trained police dogs which followed in the footsteps of the "Landespolizei" who also used dogs for detection purposes.

On 1st April 1981 the policing function was transferred by the South African Police to a newly established South West African Police force. On the 21st March 1990 the country became independent and together with the newly born Namibian nation, that was also the birth of the new Namibian Police Force.
Information from the Namibian Police website.
Roman Darbellay, 25 Oct 2001

On 01 November 2009, a new flag was introduced for the Namibian Police. It is blue, with a red stripe from the upper fly to the lower hoist (with no fimbriation, unlike the old flag); the national flag in the canton (one-third the length and width of the Police flag), fimbriated in white; and the Police badge in the lower fly.  This replaces the previous flag which was used since independence in 1990.
Miles Li, 11 Dec 2011 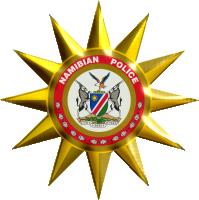