Walvis Bay is located on the Atlantic Coast of Namibia, just north of the Tropic of Capricorn on the Kuiseb River delta.

The town's name is Walvis Bay in English and Walvisbaai in Afrikaans. The bay was named in its first annexation by the Dutch in the time of Jan van Riebeeck, but the annexation was a dead letter and the bay was never occupied by the Dutch. The bay quite possibly got its name from one of the ships in Van Riebeeck’s fleet, which was called Walvis. The name was also given to one of the four bastions of the Fort de Goede Hoop which Van Riebeeck built.

The bay was annexed by Britain in 1878 and became part of the Cape Colony in 1884. The extent of the Walvis Bay territory was 1 124 km2 , much of it desert but including an important wetland south of the main bay at Sandwich Bay. It was intended that further territory in the vicinity would be annexed in due course, since the area fell into the British "sphere of influence". However Britain was outmaneuvered by Germany, when in 1892 it acknowledged Lüderitz's treaties with local chiefs and made further annexations along the coast. German maps referred to the bay as "Walfischbucht", and since these were often seen in South Africa and South West Africa, it was often imagined that the German name was actually in use at some point in time. There are references to "Walfisch Bay" or even "Wallfish Bay", a totally spurious name.

On 01 October 1922 Walvis Bay was – for all practical purposes – handed over to the administration of the Mandated Territory of South West Africa (formed in January 1921), although in terms of international law it remained part of South Africa and the Cape Province. On 30 August 1977 the Cape Province again became responsible for the administration of Walvis Bay. For parliamentary electoral purposes it was at first part of the constituency of Sea Point (in Cape Town), and later of Namaqualand. (The Sea Point constituency, when it included Walvis Bay, also included the guano islands along the coast. Some of these are still part of South Africa, but several of them were off the coast of South West Africa/Namibia.)

Following Namibian independence in 1990, agitation arose for Walvis Bay to be handed over to that country began. This was finally done by the National Party government of South Africa in 1993. The guano islands north of the Orange River were handed over at the same time.
Mike Oettle, 18 Dec 2001

South Africa no longer administers Walvis Bay, having ceded it to Namibia in 1994. When administered as part of South Africa, Walvis Bay did not have its own flag.
Bruce Berry, 03 Dec 2001

The municipal flag of Walvis Bay has a white field with the municipal arms in the centre, beneath which is the name of the town in large black capital letters.
Valentin Poposki, 06 Sept 2019 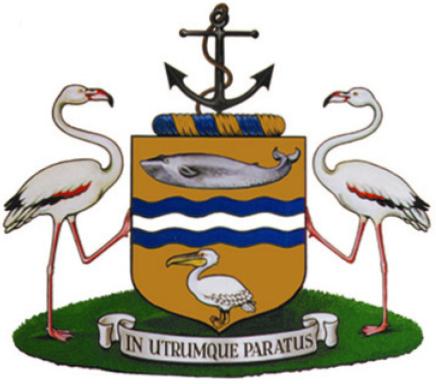 
Walvis Bay is the principle port of Namibia located on the Atlantic Coast. Until March 1994 the town was part of South Africa and administered as part of the former Cape Province of South Africa.  The Municipal Arms were originally granted by the then Administrator of South West Africa on 01 December 1964 and later registered with the South African Bureau of Heraldry on 30 October 1967.  The Arms are described as:

ARMS: Or, on a fess wavy Azure a barrulet way Argent, in chief a whale and in base a pelican, both proper
CREST: An anchor cabled erect, Sable
WREATH AND MANTLING: Or and Azure
SUPPORTERS: Two flamingos proper
MOTTO: IN UTRUMQUE PARATUS (Prepared for Either).
Bruce Berry, 24 May 2001