A major cyber attack in Estonia that hit banks, the government, national ministries, the media, the police and emergency services in 2007 highlighted the importance of cyber security. To address this need, several countries came together to establish the Cooperative Cyber Defence (CCD) COE. Based in Tallinn, Estonia, CCD's mission is to foster cooperation, capabilities and information sharing between NATO countries regarding cyber security.
To this end, CCD uses several strategies, including cyber defence exercises, law and policy workshops, technical courses and conferences, to prepare NATO and Sponsoring Nations for detecting and fighting cyber attacks. CCD is also currently working on a Manual on International Law Applicable to Armed Conflicts in Cyberspace, due for publication at the end of 2012.
Composed of experts from several NATO member countries, CCD also conducts research and training on several areas of cyber warfare. In particular, CCD focuses its research on four key areas: Legal and Policy, Concepts and Strategy, Tactical Environments and Critical Information Infrastructure Protection.
As Founding Nations, Estonia, Germany, Italy, Latvia, Lithuania, Slovakia and Spain came together to establish the CCD in 2008. It received NATO COE accreditation later the same year. In addition to the seven founding countries, Hungary is a Sponsoring Nation. Turkey and the United States are in talks to become Sponsoring Nations in the near future.
Like other COEs, all Sponsoring Nations sign a MOU to participate in CCD. Although Contributing Nations are not parties to the MOU, they may work with CCD on case-by-case basis.

"The Centre was established on May 14, 2008, it received full accreditation by NATO and attained the status of International Military Organisation on October 28, 2008. NATO Cooperative Cyber Defence Centre of Excellence is an International Military Organisation with a mission to enhance the capability, cooperation and information sharing among NATO, its member nations and partners in cyber defence by virtue of education, research and development, lessons learned and consultation."
Sources: https://ccdcoe.org/history.html and
https://en.wikipedia.org/wiki/Cooperative_Cyber_Defence_Centre_of_Excellence

Its new flag is the new logo (https://plsadaptive.s3.amazonaws.com/gmedia/_Q4dY0ccdcoe_logo.png) over a white horizontal flag, as seen here (third flag from left to right): https://ccdcoe.org/merle-maigre-assumes-command-nato-ccdcoe.html).

It seems that a new variant is in use, as the following desktop flag shows, where the logo is in blue but it is featured on the flag in inverted colors. That is: blue horizontal background with white logo.
Esteban Rivera, 21 June 2022

It doesn't seem like it is a variant, but entirely new branding altogether. In this October 2018 article by the Estonian Government, they discuss a Change of Command ceremony where the current flag was handed to Col. Jaak Tarien (Estonia) with the old logo displayed on a wall sign outside. There was no official notice of any change of branding by the CCDCOE.
Zachary Harden, 03 July 2022 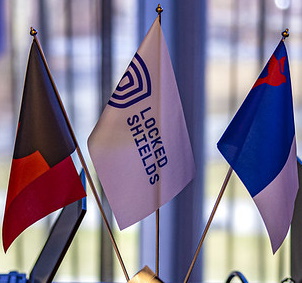 NATO's Cooperative Cyber Defence (CCD) organizes an event since 2010 a unique international cyber defence exercise offering the most complex technical live-fire challenge in the world called "Locked Shields". It is a Red team vs. Blue Team exercise, each representing a country, where the latter are formed by member nations of CCDCOE. These teams are represented by their own flag.
Esteban Rivera, 21 June 2022

The red flag (left) with the black eagle wing on a red background was possibly derived from the "Bravo" alphabet flag. The blue and white flag (right), with a red dove towards the hoist, is possibly derived from the "Alpha" alphabet flag. The white flag in the center (of the above photo) is the flag of the exercise/event.
Zachary Harden, 03 July 2022