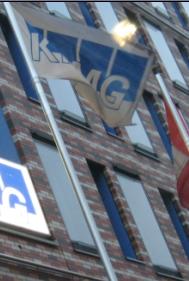 KPMG is one of the largest professional services networks in the world and one of the Big Four auditors, along with Deloitte, Ernst & Young (EY) and PwC. Its global headquarters is located in Amstelveen, Netherlands.

In 1979 Klynveld Kraayenhof & Co. (Netherlands), Thomson McLintock (United States) and Deutsche Treuhandgesellschaft (Germany) formed KMG (Klynveld Main Goerdeler) as a grouping of independent national practices to create a strong European-based international firm. Then in 1987 KMG and Peat Marwick joined forces in the first mega-merger of large accounting firms and formed a firm called KPMG in the US, and most of the rest of the world, and Peat Marwick McLintock in the UK.

In 1990 the two firms settled on the common name of KPMG Peat Marwick McLintock but in 1991 the firm was renamed KPMG Peat Marwick and in 1999 the name was reduced again to KPMG.
Esteban Rivera, 24 Dec 2011, from Wikipedia