At the Midden Drenthe website is the following description of the flag of Midden-Drenthe.
The municipal flag is green with four yellow fleur-de-lis placed crosswise. The four centrally directed lilies refer to the central position in Drenthe and to the name of the municipality (midden=center).
They have been derived from the provincial Coat of Arms, in which the Virgin Mary is depicted with a lily-staff and lily-crown. The green color refers to the environment and agriculture.
The flag is only used for official municipal occasions.
Flag adopted: 29 Jun 2002.
Jarig Bakker, 3 May 2003 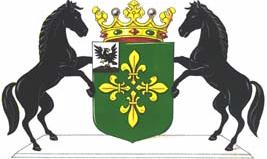 The coat of arms was granted by Royal Resolution on 6 May 2002 to the municipality of Midden-Drenthe. It is being used on official occasions. Description: "Vert. four fleur-de-lys or crosswise; in the canton an eagle regardant rising armed or, statant with the left leg on the central mound of a three-mounded peatmountain naturel. The shield surmonté with a crown or with three leaves and two pearls, and supported by two horses noir".
In the new Coat of Arms elements from the arms of all three former municipalities have been used. The color green from the Beilen Coat of Arms, to the green environment and agriculture. The (original) Lordship-arms of Hoogersmilde refers to Smilde and the peat-digging. The horses as supporters are from the arms of Westerbork, with its agriculture and recreation.
Source: Midden Drenthe website
Jarig Bakker, 3 May 2003

Flagdescription: Three equally wide vertical stripes of green, white and yellow, the white stripe with the municipal shield.
This flag was adopted 22 Aug 1938 by municipal resolution. The colors of the stripe are derived from the Coat of Arms.
Source: Sierksma's Nederlands Vlaggenboek, 1962 [sie62].
Jarig Bakker, 7 Dec 2003

Flag: four blocks of yellow and red partitioned per Scandinavian cross; over the two blocks at the hoist a standing falcon in resting pose countercharged.
Adopted 6 May 1966 by municipal resolution.
Westerbork is since 1 Jan 1998 part of the municipality of Middenveld (Drenthe, the Netherlands).
Its flag is partly derived from the Coat of Arms. The bird is a falcon; in olden days the church of Westerbork had to pay 'valkengeld' (falcon-money) to the city of Steenwijk.
Jarig Bakker,  8 August 1999.

Stefan Lambrechts spotted at this webpage a village flag for Witteveen, municipality Midden-Drenthe, Drenthe province.
On 21-23 July 2006 there were celebrations for the 80th birthday of the village, and a village flag was adopted, designed by Michiel Prijs.
Witteveen as a non-village straddled on the border of the former municipalities of Westerbork and Zweelo. It was settled by the people who first started digging the peat and who had to be without vice, as anyone developing lewd behavior was sent away.
So far the village hasn't been dignified a nickname.
The name "Witteveen" (white bog) refers probably to white cotton-grass ('wit wollegras', Latin Eriophorum vaginatum, of the family of Cyperaceae. The village counts c. 600 inhabitants. It has since 1939 a meteorological station of the KNMI (that's the Dutch institute which procuces rotten weather and then predicts it).
Flagdescription: five horizontal stripes green, white, brown, white, green, proportioned 2:1:2:1:2; on brown in white "Witteveen 1926"; a green hoisttriangle, separated by a white chevron from the other colors; in center of white a black goat.
Symbology (probably): green for the surrounding forests; white canting for the village's name; brown for the bogs and peat; when the village was settled every laborer got a house (huusje) with a 'ton' (barrel, wc) and two small sheds: for a goat and a pig - the goat on the flag refers to that pioneer's age; she also parades proudly on the logo of the local soccerclub.
Jarig Bakker,  2 Mar 2010