Esonstad's former existence is rather doubtful, although traces have been found of remnants of houses and cultural items, the remains can be admired in the little museum of Veenklooster. The town is said to have been east of the present hamlet of Ezumazijl / Iesumasyl, part of Anjum village.
Coat of Arms and flag of Oostmahorn-Esonstad in the municipality of Dongeradeel / Dongeradiel.
Coat of Arms: divided: I in red a turned strained handbow of silver, with a golden arrow; II. in blue a "kogge" ship with sail and wimpel, hoist triangle of gold charged with a black Saint James-shell.
Flag: five wavy stripes red and white, and towards the hoist a vertical blue stripe of 1/3 flaglength, charged with a yellow "kogge" ship with sail and wimpel, with a height of 3/5 flagheight.

Oostmahorn / Eastmahorn is a neighbourhood, belonging to the village of Anjum, on the coast of the former Lauwerszee and used to be the place, where the ferry to Schiermonnikoog departed. Since the drymaking of the Lauwerszee the hamlet is concentrating on tourism (=project development). The plan of "Esonstad" is part of that new development.
The bow and arrow have been adopted to remind of the entrenchment  which existed here until the 19th century (Oostmahorn is locally known as "de Skâns"). It also reminds of the family Toxopeus, which was mostly known because they rescued many sailors with the rescuing boat "Insulinde", and is derived from the family's Coat of Arms. The arrow is aimed at the east - the direction from where the enemy always came. (except for the French, who are still remembered in the books of Siebe van Aengium about "De Smokkelaars van de Schans".)
The colors are the Oostergo-colors - red and silver. The "kogge" refers to the legendary trading town of Esonstad / Esonst?d, which is supposed to have drowned in the 13th century. It is gold, referring to the gold which was earned by the trade. The triangle points at the "horn"-corner. The yellow color is for the sand on the beach and the cockle-shells are still collected from the bottom of the Waddenzee. The flag is based on the flag of Oostergo; the white stripes are wavy as they symbolize the sea. Towards the hoist the kogge from the Coat of Arms has been placed. 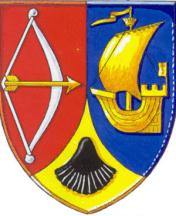 image from this site, reported by Stefan Lambrechts, 18 Aug 2003