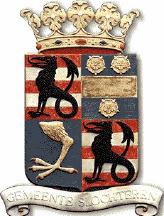 Spotted by Mr. van Heijningen: Hellum is a village in the municipality of Slochteren (Groningen province), in the Netherlands, with c. 600 inhabitants.
At the village website is a photo of the villageflag and an image of the villagelogo.
Flagdescription: quartered Scandanavian style a) white, a narrow inner red border; b) blue, a less narrow green inner border; c) white, a narrow red inner border, the village logo; d) yellow, a less narrow green inner border.
The logo is an oval charged with a blue shield with a narrow yellow horizontal stripe in center, and two yellow flowers above and one below the yellow stripe; in top of the oval "HELLUM" in black.
Symbology: yellow: the sandridge on which the village was built.
Blue: the "Schildmeer" (a small lake).
Green: agriculture and the green ribbon along which the village is built.
Red: houses.
Logo: the arms of the Rengers family, which dominated the village and lived in the (now demolished) Borg (fortified house) Menolda in the village of Hellum.
Jarig Bakker, 20 Jul 2008