The municipal logo was designed by Dick de Boer and Klaas Buys, from the Gold Ontwerp & Communicatie agency.
Ivan Sache, 16 May 2017

Shipmate Flagchart : http://www.flagchart.net
adopted 28 Aug 1986
The flag of Edam-Volendam consists of five horizontal stripes, proportioned 2:1:1:1:2, in the colors red - green - white - orange - black. The colors are of the town of Edam (red and green) and of Volendam (orange and black), separated by a white bar, which symbolizes the former waterway between Edam and Volendam, the IJe. Flag adopted 28 Aug 1986.
Source: the Edam-Volendam municipal website.
Jarig Bakker, 4 Jun 2003

The first municipal flag was: quartered diagonally; hoist three equally wide horizontal stripes RWR, with on the white stripe a
demi-facing bull in red contourcolors; top green; fly Orange-White-Orange with a foal on white in red contour-colors; bottom
black.
The basic colors are of the town of Edam (red-green) and of the village of Volendam (orange-black), ordered according to the traditional models of the Holland gueuzes. For some intricate reasons the two local emblems (the Edammer bull, and the Volendammer (canting) foal were designed in contours.
Source: Vexilla Nostra 118 (Jan-Feb 1982); VN 115-94.
adopted 21 May 1981; design: Stichting voor Banistiek en Heraldiek. It appears it was never used because nobody was able to appreciate it.
Jarig Bakker, 23 Nov 2003 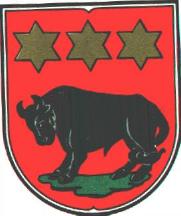