Number of inhabitants (1 Jan 2003): 8.044; area: 21,42 km². Settlements: Wognum (seat), Nibbixwoud, Zwaagdijk-West.
Wognum is a municipality in West-Friesland, Noord-Holland province. I's the birthplace of the famous Dutch comedian André Carrell.
Nickname: "koekvreters" (cake-eaters) - they don't eat cake, though: they devore it (especially Jodekoeken).
The municipal flag was adopted in 1979 after the merger of the former municipalities of Nibbixwoud and Wognum.
Description: six diagonal stripes orf green and blue, over all at 4/5 of flagheight a lion, with in the right paw a ragguly branch, all umbrated.
On 23 Sep 1975 the municipal council adopted a new flag. This flag was made to honor the Commandeur-family, which had produced four mayors in a row from 1831-1975. Thier symbol was a commander's staff, a green ragguly stick. This was held by a silhouetted lion against 6 diagonal black and red stripes. The official name is an umbrated lion, as described in Rodney Dennys' "The Heraldic Imagination" (1975); he was (is?) a "Somerset Herald of Arms".
In the flag the black and red colors shine through the flag, but not through the green stick, which is "real".
This is not the first municipal flag. In the 1930's the provincial government required the municipal council to have its own municipal flag. This flag is completely decayed, and since the municipal council occasionally likes to honor a jubilating sportsclub with its flag, this will do mighty fine.
<The old flag may have been the provincial flag of 1938 with the Wognum Coat of Arms in the canton>
Source: Vexilla Nostra Nr. 87, 1977.
Jarig Bakker, 15 Sep 2003.

Wognum is since 1 January 2007 part of Medemblik municipality 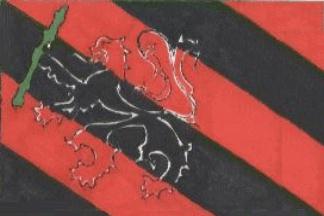 The former municipalities of Wognum and Nibbixwoud received their original arms on 26 Jun 1816. The Nibbixwoud Coat of Arms was: a blue shield with three golden perches. The Wognum Coat of Arms: a tree standing on a terrace, held on both sides by a lion. The Coat of Arms changed in 1964: the color was changed and a crown added. The tree became green instead of gold.
In 1979 both arms were used for the design of the new Coat of Arms. The tree was eradicated; the lions were maintained: a red lion with a blue tongue and nails for Holland, and a black lion with red tongue and nails. The three perches from the Coat of Arms of Nibbixwoud were provided with spiny fins and pointed black spine. The shield is covered by a golden crown of three leaves and two pearls.
Source: Wognum municipal website.