Terschelling belonged to Noordholland until WWII, when the Germans transferred the municipality to Fryslân. This was ratified by law in 1951. This is logical as the only connection to the mainland is the ferry to Harlingen in Fryslân. There are three villages: Westerschelling, Midsland and Hoorn. The island is c. 30 km long and nearly 4 km wide, with an area of 9616 hectares.
In April 1857 a flag of horizontal stripes of red, blue, yellow, green and white was reported to the Minister of the Interior. This flag is still in use, but I don't know if it is adopted officially by now. Although this flag was already shown on a flagchart of 1847, older flagcharts give a flag for Terschelling and Vlieland as one. These flags also have the colours of Vlieland (green and white) and red, white and blue stripes at both the top and bottom, so maybe the original flag was red over blue over yellow. I've read once that blue stands for the sky, red for the roofs of the houses, green for the vegetation, yellow for the beach and white for the foam heads of the waves in the North Sea, but I have no confirmation.
Mark Sensen, 25 April 1998

That's actually from on an old school rhyme here (I actually live on Terschelling)
The full rhyme goes like this:

The island Terschelling is in Frisian called "Skylge", but on the island itself called "Schylge", In the past it was called "Ter Schelling" ("on the divide") and before that "Wuxalia". In our time the easy explanation for this "divide" is the border beween Holland and Fryslân, which lay directly east of the island for centuries, However, it may be that the original Schelling was actually one of the tidal channels.
As long as The Netherlands have been united, the island used to be the east-most of the Wadden islands belonging to Holland. But what we now call the island Terschelling has several times changed hands over the past millenium or more, even if up until 1287, the Sint Hubertusvloed, it was still connected to the Frisian main land. Its strategic position also made it a prime target in most Dutch wars, sometimes suffering attacks from both sides. The last time it changed hand was WWII, when the Germans transferred the municipality once again to Fryslân.
Apart from the island Terschelling itself, and the Wadden shallows around it, the municipality includes what's left of Griend. Griend, is all that remains of the lands that once lay between the dunes, now the islands, and the Frisian mainland. Yet, without human intervention maybe not even this small island would have survived. Nowadays it's an uninhabited, 2 km long bird sanctuary, visible along the route of the Harlinger ferry. Yet, most of the Dutch Wadden islands actually gained size over the last half century or so and, with some human help, so did Griend.
Sources: Gerrit Knop - Schylgeralân, 1969 [facsimile, original 1946].
Peter Hans van den Muijzenberg, 24 Aug 2003 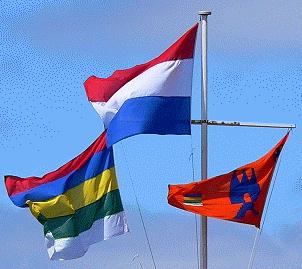 Mr. R.R. de Vries sent this image. The photo shows the Dutch flag, the flag of Terschelling in Fryslân province (a five-band) and a red trapezoid burgee, with possibly something in the canton, at the hoist a castle-like item, and at the fly the Terschelling flag. What is it? I have asked the Terschelling municipal administration, which knew nothing.
Stefan Lambrechts only found the burgee of "Het Wakend Oog" YC, with its intimidating burgee; it may be a burgee, a jumelage flag - or whatever.
Jarig Bakker, 28 Jul 2005