Number of inhabitants (1 Jan 2003): 78.213; area: 44,06 km². Settlements: Leidschendam (seat), Stompwijk, Voorburg.
On 1 Jan 2002 the new municipality of Leidschendam-Voorburg was formed by the merger of Leidschendam and Voorburg.

Via the Benevex-mailing list Hans van Heijningen reported coat of arms and flag of Leidschendam-Voorburg, a suburb of Den Haag in Zuid-Holland province. The coat of arms is at this webpage.
The flagdescription is at this webpage (bottom of page):
Three wavy horizontal bars proportioned 2:1:2 - white - blue - white, with on 1/3 of flaglength on the first bar a red castle, and on the third bar a black crescent pointing upwards.
Flag adopted 24 Jul 2003, designed by the High Council of Nobility, based on the municipal arms.

Blazoning of the arms:
“Argent a wavy fess azure with on top an opened castle with five embattlements, and below a crescent noir. The shield surmonté with a crown or with three leaves and two pearls."
Explanation of the arms: The wavy bar symbolizes the Vliet river, flowing through both former municipalities. The castle symbolizes the burgh of Voorburg. The crescent is from the Wassenaar (=crescent) family, which ruled Leidschendam since 1339.
Jarig Bakker, 24 Jul 2003 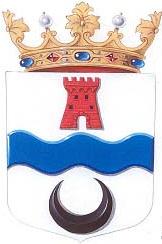