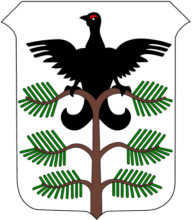 The coat of arms and the flag of Hamar were approved by the royal resolution of 9 July 1993. However, it is a traditional coat of arms used mor ethen a hundred of years - possibly without the formal royal approval, since [c2j87] mentions none.
The approval describes it in a way more similar to the older kind of wording without quting the blazon and flag description explicitly, but making it a part of a sentence, possibly indicating the quotation from an older adoption legislation, possibly even from 1896. The description is: "... en svart orrfugl med flakte vinger i toppen av et grønt furutre med naturfarget stamme, alt på sølv bunn." In English: Argent a grouse sable displayed standing on a pine tree issuant from the base.
The flag may have been introduced only the the 1993 resolution. In any case, [c2j87] recounts that the municipal administration adopted the design on 2 June 1896, after a drawing by Andreas Bloch, when celebrating 50 years of markedplace rights. That was replaced in 1962 with a drawing by Per Solheim. See also https://lokalhistoriewiki.no/index.php/Hamars_kommunev%C3%A5pen showing the Bloch's and Solheim's drawings. The 1993 drawing may have been a new one again (note the red patch over the eye and differently shaped individualized pine needles).
However, the coat of arms is much older, going back to the Middle Ages. Hamar was destroyed in the reformation wars in 1567 and the seal was lost. No imprint of it was preserved either, but a description was - in the so called Hamarkronik from ca. 1550 in almost the same wording: "Hammers vaaben det var en vhrhane med udslagen vinger vdi toppen paa it grønt furutre"
Željko Heimer, 11 November 2015