The Constitution of the party can be downloaded at http://www.nepalicongress.org.np/party/nc_cons_2017.pdf. The text is written in Nepali but shows an image of the current flag of the party, which is horizontally divided red-white-red with four red stars (1+2+1) in the middle of the white stripe. It is similar to the image shown here, above.
Ivan Sache, 30 January 2003

On a 1991 magazine there was a picture taken during the pro-democracy demonstrations: in it there were two flags, apparently two versions of the same flag: horizontal (vertical) red-white-red with four (three) red stars:


According to sitaula@panther.middlebury.edu this is the flag of Nepali Congress Party, which is the ruling political party of Nepal

I have to add my "sand grain" with the NCP flag according to W.Smith (1976).
Horizontal red-white-red, with four *blue* stars in the white stripe.

I have tentative explanation, which is totally uncertified:
In Novermber 1990 Nepal turned from an Absolute Monarchy to Parliamentary Monarchy after violent riots. If the NCP had to abandon it monpolistic situation, it might have had to abandon its monopolistic use of the national colours, and retained only the red, the blue being used by the opposition party(ies)

Posted on news.yahoo.com, apparently a variant of the Nepali Congress Party's flag, though the story identifies it as the 'Nepali Congress-Democratic Party'--perhaps a splinter group? Anyway, the flag is a horizontal red-white-red triband, same as regular NCP flag, but the four stars in center of middle stripe are here replaced by outlined green brazier with dark red fire and aflame outline 'c.'
Eugene Ipavec, 7 February 2005

I think this is the flag of Nepali Congress-Democratic (the break-away party led by Deuba). The torch is also used in the symbol of the trade union of the Democratic Confederation of Nepalese Trade Unions (DECONT).
Eugene Ipavec, 8 February 2005 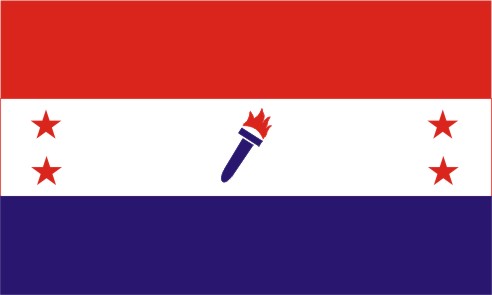 This flag has been seen flying in Kathmandu and Gorkha town. It is a party flag for sure, but I couldn’t discover which party it belongs to.
Roman Kogovsek, 2 July 2005

The horizontal-triband layout, red stars and torch are somewhat reminiscent of assorted variants of the flag of the Nepali Congress Party. A splinter group, perhaps?
Eugene Ipavec, 2 July 2005

It is a red over white over red horizontal tricolour of unknown ratio. In the centre of the white stripe there is a blue torch with a blue flame, surrounded by five red 5-point-stars. The flag is probably a variant of the Nepalese Congress Party. It was waved in a rally against King Gyanendra in Katmandu.
Source: Tagesschau, 25th May 2006, news on ARD(1st German TV)
Klaus-Michael Schneider, 16 May 2006

Another variant flag of the Congress Party (red-white-red with a torch in center) bears the electoral symbol (a torch with a red edged flame over a green lined base) in the center.
Jaume Ollé, 24 February 2007

In this N Y Times article, the placement and perhaps even the number of stars would appear to be variable.
Albert S. Kirsch, 12 April 2008

The web site of the All Nepal Women's Association (ANWA) shows its flag.  It also describes the association as "the largest national women's organization in the country. It was founded in 1950. ANWA is the common and independent association of democratic, patriotic and progressive Nepalese women. It organizes women of all sectors and classes nationwide including working women, peasants, youth, students, house-wives, intellectuals, professionals, i.e., civil servants, teachers, nurses, etc. It envisages to build a powerful mass-based women's movement to uplift the status of women in the society. Its main aim is to empower and liberate women."

The site shows an image which includes a flag - horizontal red-white-red with four red stars in diamond formation in the middle stripe, like one of the variants of the Nepalese Congress Party flags (shown above), with red stars.