Niue (population 1,751 (1992)) is a self governing territory in free association with New Zealand (similar to the Cook Islands I wrote about earlier). Niue is fully responsible for its internal affairs; New Zealand retains responsibility for foreign affairs. Niue achieved this status in 1974. Its "yellow ensign" flag was adopted in 1975.
Stuart Park, 15 December 1995

More information on this flag, the "Yellow Ensign":

Crampton's "World of Flags" states that the yellow field is to symbolize "the warm friendship between Niue and New Zealand", whose colony Niue is.

Reading between the lines some, I gather this flag was something of a tribute to New Zealand: they wanted something yellow for the friendship angle, and they wanted to honor their host country by making the flags similar...so they made it a yellow field and moved the five stars usually found on the NZ flag to the canton.

Taken this way, I'm not even sure that the islanders even considered Britain at all in "defacing" the Union Flag. To them, it was part of NZ's flag, just a pretty, striped canton, and they innocently modified it for their own friendly purposes.

With any luck, the British won't be floating battleships into Alofi (Niue's capital) and demanding of the confused islanders that they remove those stars... :-)
Steve `Scooter' Kramer, 9 June 1996

The Niue Consulate in Auckland (New Zealand) has provided some official details about the Niue flag. It reads:

The Niue National Flag shall be described as follows :

"The Niue National Flag shall be a golden yellow Flag, bearing in the upper canton of the hoist thereof the Union Flag, commonly known as the Union Jack, displaying two five-pointed yellow stars on the vertical line and on the horizontal line thereof separated by a blue disc containing a larger yellow star."

And it shall mean:

"Golden yellow" represents the bright sunshine of Niue and the warm feelings of the Niuean people towards New Zealand and her people.
"The Union Flag, commonly known as the Union Jack" represents that Niue was a British Protectorate, proclaimed on 19 October 1900 after petitioning by the Kings and Chiefs of Niue to Great Britain for the Union Flag to be flown in Niue as the symbol of protection.
"The four small stars" represent the Southern Cross and New Zealand under whose administration Niue was placed by Great Britain in 1901 and as well the continuing close relationship between Niue and New Zealand.
"The larger star within the blue disc" represents the self-governing status of Niue, standing alone within the deep blue sea.

If this is so, wouldn't that make the two pairs of stars differently sized on the bars of the St. George's cross? I think that at least as reasonable an assumption as the first one would be that the fours stars are equal. Maybe the fours stars are somewhat less then SGC width? Would half the central star diameter fit? It is hard to tell from any small sited image available to me.
Željko Heimer, 5 February, 2000

A Niuean source provides us with legislation regarding the Niue flag. It was adopted by the Niue Flag Act 1975, 1975/16 – 1975 (unlike other acts, not more precise date provided here then simply 1975). It does not provide any drawings, nor dimensions of the flag and its part, but it provides explanation of the symbolic. It is short enough to be quoted in extenso (Niue Laws | Tau Fakatufono-tohi a Niue, Legislation as at December 2006, Volume 3 | Tohi 3,Statutes, N-Z, Government of Niue, Alofi, 2006, pp. 1365-1366, http://www.gov.nu/wb/media/Volume%203.pdf):

To provide for the establishment and use of a Niue Flag
1 Short title
This is the Niue Flag Act 1975.

3 Regulations
Cabinet may make regulations prescribing the circumstances in which and the conditions subject to which the Niue Flag may be flown.

4 Offences
Every person who defaces the Niue Flag by placing any sign, representation, or letter thereon commits an offence, and is liable to a fine not exceeding 5 penalty units or a term of imprisonment not exceeding 6 months.

Schedule
THE NIUE FLAG
The Niue Flag shall be described as follows:
“The Niue National Flag shall be a golden yellow flag, bearing on the upper canton of the hoist thereof the Union Flag, commonly known as the Union Jack, displaying 2 five-pointed yellow stars on the vertical line and on the horizontal line thereof separated by a blue disc containing a larger five-pointed yellow star.”
AND IT SHALL MEAN:
Golden yellow represents the bright sunshine of Niue and the warm feelings of the Niuean people towards New Zealand and her people. The Union Flag, commonly known as the Union Jack represents that Niue was a British Protectorate, proclaimed on 19 October 1900 after petitioning by the Kings and Chiefs of Niue to Great Britain for the Union Flag to be flown in Niue as the symbol of protection. The four small stars represent the Southern Cross and New Zealand under whose administration Niue was placed by Great Britain in 1901 and as well reflecting the continuing close relationship between Niue and New Zealand. The larger star within the blue disc represents the self-governing status of Niue, standing alone within the deep blue sea.

On the page 1586 in the text of another act (Territorial Sea and Exclusive Economic Zone Act 1996) it is mentioned "... by vessels carrying the flag of Niue..." which would imply that the flag of Niue is indeed used not only on land but also by the vessels registered in Niue, therefore it is indeed a yellow ensign (and not CS-/--- as "conservatively" indicated on Wikipedia http://en.wikipedia.org/wiki/Flag_of_Niue and World Flag Database, http://www.flags.net/NIUE.htm).
Željko Heimer, 21 January 2012

From 2012 the Niue Flag is also prescribed in the 'National colours' section of the Merchant Shipping (Registration of Foreign Vessels) Act 2012. Section 39 (1) says; 'The National Flag shall be the proper national colours for a ship registered under this Act.'. In Section 3 Definitions, "National Flag" means the National Flag of Niue. So after nearly two hundred years, the mythical 'yellow ensign' of the Royal Navy now actually exists in the shipping law of a Commonwealth nation, albeit with a defaced Union canton.
Jeff Thomson, 19 January 2018

The Seal of Niue was approved by Cabinet under article 15 of the Niue Constitution. The Niue Legislative Assembly of 29th September 2021 passed an Act for the use of the Seal of Niue and to provide for the Coat of Arms and related matters.

In 1974 Niue became a self-governing state in free association with New Zealand. The Constitution of Niue provides that there shall be a Public Seal of Niue, to be in such form or forms as the Cabinet from time to time approves. At the time of self-government, Cabinet agreed to continue to use the New Zealand Coat of Arms as the Public Seal of Niue. This was a temporary measure until the Cabinet approves a different form or forms as envisaged in the Niue Constitution.
As a young nation Niue has come a long way to creating its own identity and positioning itself to stand out in the world through its diplomatic partnerships and regional and international relations.
The Niue Public Seal represents Niue and all its distinct features in particular cultural significance, country history, and geographical appropriateness. It is also a fundamental part to foster Niue’s position in the world and will be a symbol for all Niue peoples. It reflects the features that sets Niue apart as a country and an image to sustain Niue’s political dynamics.

Use of the Seal - the Seal of Niue may be used by the Speaker, on the advice of Cabinet, for the authentication of any public document in relation to the Government of Niue or for the execution of any document required by law to be executed under the Seal of Niue.

Judicial Notice of the Seal - Judicial notice shall be taken of the Seal of Niue in all Courts.

Description of the Seal : The nation of Niue is bound to God and respects the Queen of England as its Head of State. The government and its people are joined together in defending, fostering and strengthening the values of the nation which are represented by the unique environment we all live in.

Crown: The Crown represents the Sovereign as the Head of State. It also represents Niue’s historical affiliation with Great Britain and the arrival of the Gospel.

Outer Circle: The Outer Circle represents the 14 villages of Niue and is in the form of a traditional Niue garland that is presented at ceremonies as a gift that symbolises honour, welcome and respect.
The traditional Niue design represents the binding of Niue to the rest of the world, with the world being represented by the circular shape of the design The crown resting on top of the garland shows the utmost respect and honour the people of Niue have for the Sovereign. But most significantly for the tagata Niue, the Outer Circle depicts an umbilical cord; the spiritual connection of the tagata Niue to the land and the ocean that surrounds it.

Inner circle: The Inner Circle represents the natural and unique environment of Niue. The fonua (land) is nurtured to provide for the sustainability of the tagata Niue and the spirit of unity by the people to gather, guard and protect its natural resources.
The triangular shapes within in the Inner Circle represent the hiapo designs to signify the jagged coral and the harsh coastal environment of Niue frequently described as the Rock of Polynesia.

Tree: The tree and the designs of the flora of Niue represents life. The designs are based on the original Niue Hiapo representing life, sustenance, culture, prosperity and the tagata Niue.

Katoua: These two cleaving clubs are the katoua that represent defence and security. The clubs are bound together symbolising the unity of Tafiti and Motu. Together, they can fulfil the vision of, “Working Together to Protect the People and the Environment”.
Concepts to the design of the Niue Public Seal were provided by Mr. Kenneth Green of Alofi. The Tāoga Niue Council and Vagahau Niue Commission collaborated with Niue Crown Law Office and New Zealand Mint to the presentation of design for Cabinet’s approval. The work commenced in 2016 under the guidance of former Minister Tāoga Niue and Premier of Niue, the late Sir Toke T Talagi, KNZM. 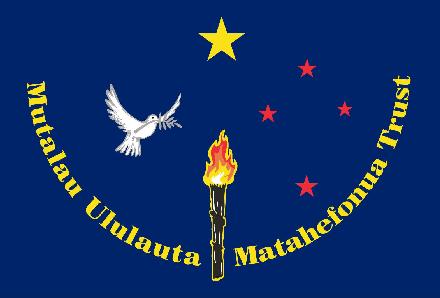 image located by Aleksandar Nemet, 4 May 2010

Description of a flag:
"The central big star represents Niue as stand alone nation in the wide Pacific ocean. The five stars represent the Southern Cross on the Niue flag which signifies its link to the Commonwealth. The torch and dove go hand in hand and both represent Mutalau as being the first village of Niue to receive the gospel. Navy blue is the official Mutalau colour."

based on an image by Mason Kaye

The Niue Yacht Club in the South Pacific has a yellow background, with a green map of Niue Island. The longitude and latitude are given in green: 19 degrees S, 169 degrees 55 W.
Source: The Complete Guide To Clubs & Flags, p. 30
Mason Kaye, 11 June 2004