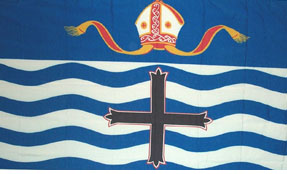 "The City of Nelson is one of the few cities in New Zealand which has adopted its own special Civic flag. The flag incorporates in its design a number of references to the history and heraldry of the City. [...] In June 1973 the City Council established a charitable trust called "The City of Nelson Civic Trust". This trust held its first meeting on Tuesday 12 June 1973. Since its inaugural meeting the Trust has undertaken a number of projects for the benefit of the City, one of these projects being the design and commissioning of a flag for the City of Nelson. The flag was unveiled to the City Council at a meeting in March 1987. The design of the flag is based on the City Arms, having a Mitre, with its fringed lappets flowing on either side, on a blue background which extends over the top third of the flag, and below this a series of blue and white wavy lines on which is
superimposed a black. (The cross from the Arms of Lord Nelson.) The flag is sold in 3 sizes; a desk top flag with pole mounting base ($30.80): a medium sized flag -900mm x 450mm ($55.00): or, a large flag - 1800mm x 900mm ($90.00)."
Olivier Touzeau, quoting from the Nelson City Council web site, 9 August 2002

It is worth noting that this flag appears to be intended for use by the general public in Nelson, not just by the city council.
Jonathan Dixon, 19 April 2005

It is certainly used that way - I was very impressed when I was in Nelson a couple of years ago to see their civic flag everywhere.
James Dignan, 19 April 2005