Abel Tasman's journal is available online at Project Gutenberg of Australia; I looked through it, but the only reference to Maori flags is to "small white flags," apparently used as tokens of peace, and therefore likely in imitation of European practices:

"We kept quiet until some of the foremost were within reach of our guns, and then fired 1 or 2 shots from the gun-room with our pieces, without however doing them any harm; those on board the Zeehaan also fired, and in the largest prow hit a man who held a small white flag in his hand, and who fell down."

"We therefore also hoisted our white flag astern, upon which there came alongside our ship a small prow with four persons in it; they were able-bodied men, having their bodies painted black from the waist to the thighs, their necks hung round with leaves; they carried a small white flag and a cloth made of the bark of trees. They fastened the said flag to the stem of our boat."

"The said prows then came alongside, bringing a present from the king, consisting of a fine large hog, a number of coconuts, and some yams; the bearer of these presents being the same person who brought us the small white flag and the cloth of bark."

Intriguing that the use of the white flag should be known, but there have long been rumours that Tasman was not the first european to sight these islands. As to a "cloth of bark", I suspect that this is some form of tapa.

Tapa is a polynesian cloth made from Mulberry tree bark, and used for ceremonial purposes - it is exchanged as a gift at major celebrations like weddings and christenings, for instance, and is often used as decorative wall-hangings. It is traditionally the natural milky brown colour of mulched and hammered bark, adorned with black designs, which vary from area to area but are not fixed in arrangement or pattern. I've never heard of it being used for a flag, but it is possible, I suppose. It's far more commonly associated with Samoan and Tongan culture than Maori culture. I'd compare it more with tartan than with flag design.
James Dignan, 14 September 2007

Flags are very popular symbols of mana (prestige) among the Maori, but it's fairly uncommon for individual chiefs to have flags. However, it has to be remembered that at the time of Rua Kenana and others, Maori were largely at odds with the pakeha government and trying to assert their sovereignty. Specific flags were also very common among followers of the Hau Hau and Pai Marire movements.
James Dignan, 29 January 2009

Television New Zealand is currently running a major series on the history of New Zealand called Frontier of Dreams. The latest episode dealt with the New Zealand land wars, fought between the British Army and Maori tribes during the 1860s. During this time, many of the maori tribes grouped together into what became known as the Kingi Movement, a movement which continues today. The head of that movement during the 1860s, Potatau te Wherowhero, became the first Maori king, Potatau I (his descendent Te Ataairangi Kaahu is the current Maori Queen). The title is largely symbolic, but carries a great deal of mana (prestige) and is still of major importance within Maori politics.

During the television programme, a flag was shown, which purported to be the flag of Potatau Te Wherowhero. I've not seen the flag before, but, judging by the accuracy of the rest of the series so far and also by the love of flags among the Maori, it would not surprise me at all if such a flag existed and was of a similar design to that shown.
James Dignan, 15 October 2005

image by Chrystian Kretowicz, 5 May 2009

Maori King Tuheitia has a new royal flag. This is the beatiful (in my humble opinion) flag of the previous monarch, Kuini Te Ata-i-Rangi-Kaahu Koroki Te Rata Mahuta Tawhiao Potatau.
Chrystian Kretowicz, 5 May 2009

Te Kooti Arikirangi te Turuki was a leading Maori warrior and rebel leader of the 1860s. His feats are the stuff of legend as much as of history. Imprisoned on the Chatham Islands, he received a vision in which the Archangel Michael told him to found a new religion for his people, Ringatu ("The upraised hand"). After a daring escape he and his followers wreaked havoc among the settlers along the east coast of the New Zealand North Island during the 1860s and 1870s. Te Kooti's support was largely among the Tuhoe iwi (tribe), a major Maori iwi based in the Urewera mountains between Lake Taupo and Hawkes Bay.

The symbols on the flag have been much debated. The letters 'WI' probably stood for the Holy Spirit, Wairua Tapu, 'WI' also refers to the Holy Spirit in the Ringatu Faith. The crescent moon was a tohu (portent) of a new world; the red cross, the fighting cross of the Archangel Michael. The moon and cross reiterate the first two elements of Te Wepu, the captured flag of Ngati Kuhungunu. Te Kooti probably took these images and incorporated them into a flag of his own design.

(I have found out nothing about the flag of Ngati Kuhungunu, but flags were, and still are, very commonly used by diffeent Maori Iwi and other groups.)

Note the unusual dimensions, approximately 1:2.5. The original, still in Te Papa Tongarewa (NZ's national museum) was hand sewn by Te Kooti's supporters in cotton, with woollen stitching. It is 1940 x 795 mm in size. The different symbols are in different shades of red (as shown in the gif), but this is probably due to the scarcity of materials rather than having any symbolic meaning. While making this gif I noted that the symbols actually form the word "Iwi", meaning tribal group. It is quite possible that Te Kooti intended this extra possible meaning of the symbols.

In February 1870 Colonel McDonnell captured the flag flown by Te Kooti's forces at Tapapa (north of Putaruru) on 25 January 1870. The stars are similar to those used on [Maori] "King" flags, and the green and black device in the top left-hand corner was at first mistaken for the Union Jack.
Thanh-Tâm Lę, 24 January 1999, supposedly quoting from New Zealand Encyclopaedia

It is a 4:5 red flag with a unusual UJ in the canton (quartered green and black, over it a thin white saltire, and red cross frimbriated white over all), three black, green and white four pointed stars on the upper fly, and two white bars at top hoist and bottom hoist. It looks like a Maori UJ ensign based flag.
António Martins, 21 March 2000 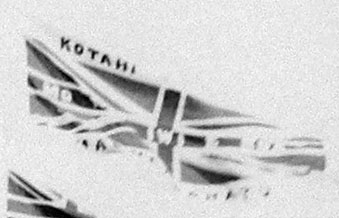 An article about an exhbition involving the Presbyterian Church in Aoteroa New Zealand, makes mention in passing about the personal flag of a Maori leader or chief.
[Original link: http://www.presbyterian.org.nz/5032.0.html]
Ron Lahav, 29 January 2009

Rua Kenana was no simple tribal chief. He was a prophet, and the leader of both a tribal and spiritual movement, and is still held in great awe by many New Zealanders, Maori and Pakeha (white) alike. He was also spiritual heir to the Ringatu faith, following after its founder, Te Kooti. (See English Wikipedia.)

When it comes to personal flags, things are a little confused because of his name. "Kenana" is Maori for "Canaan", and as such appears on several Maori chiefly flags from the latter 19th and early 20th centuries (that of Te Ua, for instance). There was an image of his flag at a big flag exhibition here a couple of years ago, however, though sadly as a detail of a fairly grainy photograph from 1908. The flag was the top flag of four flying from one Niu pole. The following details were given:

"The top flag is Rua's flag [showing the words] KOTAHI TE TURE MO NGA IWI E RUA MAUNGAPOHATU (one law for both peoples Maungapohatu), then the new national flag, the red ensign [and] the tipuna (ancestral) flag TE TAHI O TE RANGI (the one of Te Rangi), thereby showing Rua's descent from the Tuhoe ancestor of that name."

Maungapohatu was the location of Rua Kenana's settlement. The tipuna flag seems to be a standard Maori hapu (subtribe) design, with white lettering on a red ensign.
James Dignan, 29 January 2009

That flag is E11 on this page from the 1966 Encyclopedia of New Zealand - sounds like the Gate Pa flag (site of a fierce battle not far from the current city of Tauranga).
James Dignan, 17 November 2005

I was reading an account of different battle memorials when I came across one of a fierce battle between British expeditionary forces and Maori tribes in the 19th Century in Aotearoa New Zealand. I was unfamiliar with the flag it displayed for the Maori and researched it to find it was the flag of Gate Pa. Further research showed that a pa was the Maori word for a fortification made with fences and earthworks, and that the Maori had scored a surprising (to the British) victory there by using their defenses to their advantage.

What I'm finding confusing is that I can't figure out what the flag represented. There are many different iwi (tribes) among the Maori and my assumption was that it was the flag of such an iwi, but all references seem to indicate that the flag was used only by those within the pa, and not as a war flag by the Maori or as a flag by any iwi in general...nor do I know whether there were a number of united tribes within the pa or not. Does anyone have any light to shed on the subject?
Steve Kramer, 24 December 2013

I can't help with the actual flag, but I can help with some historical background. During the latter part of the 19th century, NZ's North island was the scene of a series of battles between the British settlers and indigenous Maori, with the most violent battles occurring in Taranaki (roughly between New Plymouth and Wanganui) and the Waikato region (immediately south of Auckland). These battles were for a long time referred to as "The Maori Wars", but are today more accurately called "The New Zealand Wars". One of the pivotal battles was the Battle of Gate Pa, a major fortification close to Tauranga, in 1864.

The British colonial forces greatly underestimated the military strategies of the Maori people, in particular the very effective defensive structure of the pa. It has been claimed that in many ways the Maori strategy was more effective than the British, and of course they had the advantage of knowing the land. In any case, Gate Pa was a serious defeat for the colonial forces.

Gate Pa was occupied by members of four Maori iwi (tribes) - Ngāi Te Rangi, Ngāti Koheriki, Ngāti Pikiao, and Ngāti Porou, and were nominally under the leadership of Rawiri Puhirake (Ngāi Te Rangi). It may be that the flag was a personal flag of Puhirake.

For more on Gate Pa: http://www.nzhistory.net.nz/war/war-in-tauranga/gate-pa. For a more in-depth look at the background to the battle, try hunting down a copy of James Belich's book "The New Zealand Wars" (or the television series which was developed from it). There's also this: https://www.youtube.com/watch?v=zyeCbn8u0og, though the pronunciation is so distressingly bad I'd hesitate to recommend it.
James Dignan, 26 December 2013

In relation to the Gate Pa flag, “The star, believed to represent the Star of Bethlehem, is in the ascendant” (http://www.teara.govt.nz/en/1966/flags/page-6)
David Prothero, 22 January 2014