Images of provincial flags here drawn after Symbols of the State, published by the Philippines Bureau of Local Government.

[Note: the Autonomous Region of Muslim Mindanao now comprises five provinces and Marawi City, although much of the information on this page alludes to the existence of only four provinces - Basilan was transferred to the ARMM in the late 1990s.]

As other provincial flags in Philippines, the flag is composed by a plain background with the official seal of the province in the center. At the center of the seal is the handle of the kris, slightly drawn symbolizing authority used by the major tribes in the area. White in color as it stands for purity, and only slightly drawn as it is for peace. The crescent symbolizes the predominance of its Muslim populace. Its yellow color typifies the social class structure of its major tribes. The four small stars represent its component provinces, namely: Lanao del Sur, Maguindanao, Sulu and Tawi-Tawi. The big star represent the Republic of the Philippines. The background is green to show its fertile soil, rich vegetation and animal life and abundant natural resources.

The Autonomous Region of Muslim Mindanao (ARMM) was created in August 1, 1989 by virtue of Republic Act No. 6734. However, it was actually organized and inaugurated on November 6, 1990 (with Philippines under the presidency of Corazon Aquino) at Cotabato City, the seat of the Regional Government. In 1996, to get the Moro National Liberation Front to lay down its arms, the MNLF former chief Nur Misuari was given the chief executive post. A plebiscite on 14 August 2001 in the 14 provinces and cities of Mindanao and Palawan, asking them whether they wanted to join the ARMM, was a big failure. The results showed that only Basilan province (minus Isabela city) and Marawi City opted to join ARMM. The plebiscite was a required before any election could take place in the ARMM.

The only flag that can flown on the Philippines is the Filipino flag, anyway, every province and city has got its own flag displayed on the public offices and government buildings except the A.R.M.M. The reason is that the Autonomous Region of Muslim Mindanao is more than a simple region of the Philippines. The seal is official, but not the flag. Maybe it will be in the future.

There is a non-official flag adopted by the members of the A.R.M.M.; it is a flag of three horizontal stripes of blue, white and red, with crescent, stars and kris on it. A seal (the crescent and stars) similar to the official seal and a Moro sword (kris) are placed parallel to the stripes.
Paolo Paddeu, 31 July 2007

Here is a link to a photograph of the ARMM flag that I spotted months before: http://flickr.com/photos/11396417@N00/290489684/. I'm not sure as to whether this is a general flag for the Autonomous Region in Muslim Mindanao or just the flag of the regional assembly that convenes in Cotabato City. Either way, the ARMM surely has greater powers than the regular regions as it is the only one with a regional legislature. The other regions, as far as I'm aware, do not have flags.

The ARMM, by the way, is now composed of six provinces: Basilan, Lanao del Sur, Maguindanao, Shariff Kabunsuan, Sulu and Tawi-Tawi. The province of Shariff Kabunsuan - named after the Islamic missionary that brought the religion to the area - was carved out of the province of Maguindanao and became the country's 80th province on October 31, 2006. Also included in the ARMM are two component cities (cities that are under the jurisdiction of a province): Marawi (in Lanao del Sur) and Lamitan (in Basilan). However, the ARMM does exercise jurisdiction over the city where its seat of government is located (Cotabato City is part of Region 12) or the capital city of one of its provinces (the majority of Isabela City residents voted against joining the ARMM while the rest of Basilan did).
Jay Allen Villapando, 1 August 2007

That wouldn't be surprising as that description is from 1992, while we have it that the fifth province was added in the late ninety's. However, doesn't that 1992 rather describe a flag with three columns?
Peter Hans van den Muijzenberg, 23 May 2012

The legislation can be found here. According to this Facebook article it was titled as "Bangsamoro Autonomy Act No. 12" it had some meaning and symbolism for all elements of the flag. According to Republic Act No. 11054, the Bangsamoro Organic Law, states the following about the symbols and its relation to the Philippine flag and anthem:

The law requires a 3x5.5 foot ratio flag, however, I think there will be 3x6 ratio flags present because of the aforementioned rules on having to fly side by side with the Philippine flag. Each bar is 1/3 of the width and all of the length and goes in order of green, white and red. Green, representing the Muslim population of the region, is listed as hex 009966. White, representing peace, tranquility and righteousness, is hex FFFFFF Red, to honor those who fell in the struggle for the Bangsamoro, is listed as hex FF3333 Gold crescent and seven-pointed star, to represent the future of the Bangsamoro and the physical makeup of the region, is listed as hex FFD700 The kris, a weapon that is used by the Bangsamoro for defense against all foes, is listed as white and it is sixty percent of the length of the flag. It shall be placed in the center of the red section.
Zachary Harden, 28 August 2019

Basilan, with a population of 326,000, is divided into eight municipalities or towns, of which Isabela serves as the capital. The date 1973 on the shield is the year in which Basilan became a province; previously it had been governed as a city in the province of Zamboanga. It is apparently troubled by two armed insurgencies.
John Ayer, 15 February 2001

[no longer in use]

The flag of city of Basilan shows the island province set in a sun-kissed sea, with two hands clasped in friendship, and the border divided between the symbols of Christianity and Islam.
John Ayer, 9 April 2001

There is now no city of Basilan, and has not been since the island became a province in 1973. This flag was therefore already obsolete when the book Symbols of the State was published in 1975, and the book evidently does contain the flag of the province that succeeded the city.
John Ayer, 28 May 2001

The Philippine Province of Lanao del Sur is defined by Lake Lanao, the second largest and deepest in the Philippine Islands. The Agus River, its outlet to the sea at Illana Bay, is the swiftest river in the country, and a hydroelectric station at Maria Cristina Falls supplies electricity to a large area. The Maranao, the People of the Lake, are late but zealous converts to Islam, and have always been intolerant of outside rule. The Spanish were still trying to establish their government here in the 1890s. After the Spanish-American War the Maranao turned to resisting the Americans, then the Japanese, then the Philippine government. The area was a stronghold of the Moro National Liberation Front, which seized and briefly held the provincial capital, Marawi, in 1972. With the creation of an Autonomous Region in Moslem Mindanao the MNLF finally made peace. Marawi is the only chartered city in the Philippines with a Moslem majority. It contains several Moslem educational institutions, one founded by King Faisal of Sa'udi Arabia, another by Aga Khan.
John Ayer, 13 June 2001

The Philippine Republic's Province of Maguindanao preserves the name of the state so firmly established by Sultan Kudarat of illustrious memory. Its population is 801,100 by the 2000 census. It contains the City of Cotabato City, headquarters of both Region XII and the Autonomous Region of Moslem Mindanao, but the provincial capital is Shariff Aguak. Shariff Aguak was a fifteenth-century Mayal prince from Johore who introduced Islam into Mindanao. Islam is now dominant in Maguindanao, and in 1989 the province voted to be part of the Autonomous Region of Moslem Mindanao. Maguindanao occupies the lower valley of the Pulangi River, also known as the Rio Grande de Mindanao. The soil is extremely fertile, and produces a wide variety of agricultural products; fishing, plywood production, and small-scale industries and crafts are also economically significant.
John Ayer, 13 June 2001

The flag of Sulu province, with arms in center where you can see the Christian and Muslim symbols, the Philippine sun, and the Mecca doors.
Jaume Ollé, 14 July 2000

The Province of Sulu in the Republic of the Philippines occupies the northeastern half of an archipelago extending from Zamboanga toward Borneo (Tawi-Tawi occupies the remainder). Its population is 619,668 by the 2000 census, on four island groups with a total of 1785 sq.km. of land area and comprising eighteen towns, of which Jolo is the capital. Jolo was probably the most populous and wealthiest town in the Philippines in the sixteenth century, with a large foreign trade, and became the capital of a sultanate that extended not only over the Sulu Archipelago but also to Sabah, Palawan, and Zamboanga. The Spanish tried for hundreds of years to reduce this sultanate to subjection. They finally attained partial success in the late nineteenth century, when they destroyed Jolo and built there a fortress with four strong gates. The Suluans were no more amenable to American control, and maintained open warfare until 1915, when the Americans imposed a treaty by which the sultan gave up his temporal authority and Sulu became part of the Philippines. Separatist warfare against the Philippine central government did great damage in the 1970s (Jolo was burned) but that seems to have been pacified by the establishment of an Autonomous Region in Muslim Mindanao, and Sulu deliberately adopted an emblem in which the symbols of Islam and Christianity are harmoniously joined. It has also opened a gate to the outer world.
John Ayer, 21 June 2001

The Philippine province of Tawi-Tawi, part of the Autonomous Region in Muslim Mindanao, occupies the southern end of the Sulu Archipelago. It is in fact the southernmost part of the Philippine Republic, extending to within thirty kilometers of Sabah, Malaysia. "Tawi-Tawi" means "very far away." The province consists of a great many small islands, grouped into ten towns. The people make their living mostly from the sea. Many of them live in house-boats, and more live in houses built over the water and connected by little bridges. They are expert seamen and boatbuilders. The islands abound with white, sandy beaches, bright coral reefs, exotic wildlife, and brightly dressed, friendly natives who understand English, but there is very little tourism.
John Ayer, 23 June 2001

Flag of the Jamasali Royal Family 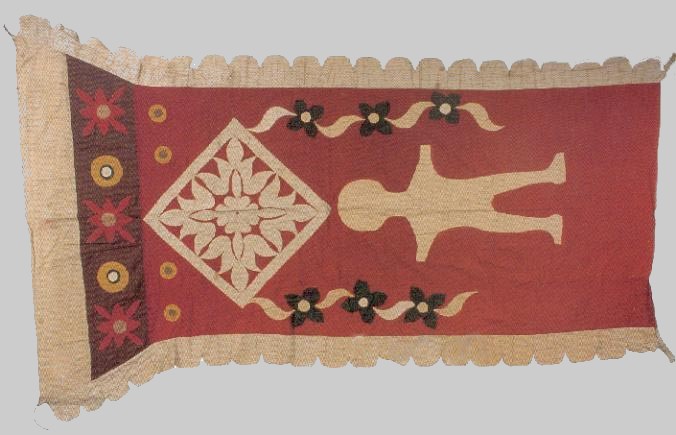 The royal flag of the Jamasali Royal Family of Tawi Tawi Kingdom, southern Philippines. This flag is also displayed at the University of California Los Angeles at the Phoebe Apperson Hearst Museum of Anthropology.

We have no clear evidences about the flag named "Jamasali Royal flag" (Tawi Tawi, Philippines) the flag is a ceremonial flag but we have no evidences to support the theory of Ram Jamasalli who, with his family is only seeking a recognition by the international public as "the real Sultan of Sulu and Tawi Tawi (who was under the Sulu Sultanate administration ). We consider this flag simply a ceremonial flag like many other of this kind.
Paolo Paddeu, 18 October 2005