Flag images here drawn after Symbols of the State, published by the Philippines Bureau of Local Government.

The island of Biliran, a province since 1992, is the newest province in the region, and, with 140,000 inhabitants on 555 sq. km., the smallest in both population and area. It is divided into eight towns, of which Naval is the capital.
John Ayer, 17 February 2001

South of Biliran is the island of Leyte, divided into the two provinces of Leyte and Southern Leyte. Leyte has a population of 1,572,000 in Tacloban City (the capital), Ormoc City, and forty-four towns. The island is unusually rich in history. Magellan visited here, and the first Christian mass in the Philippines was apparently celebrated on Leyte on Easter Sunday, 1521. The Leyteńos, among the first Filipinos to welcome the Spaniards, were also among the first to take up arms against them. It was on Leyte that Gen. Douglas MacArthur returned to the Philippines in 1944, accompanied by President Sergio Osmeńa and Gen. Carlos P. Romolo of the Commonwealth of the Philippine Islands. A town in Leyte is named MacArthur. To the east was fought on 24-26 October 1944 the Battle of Leyte Gulf, which noted naval historian Commodore Samuel Eliot Morison calls "the greatest naval battle of all time," and the last in which capital ships formed line of battle and exchanged cannon-fire. It was disastrous to the Japanese. Hill 120 on Leyte, where American soldiers raised the Stars and Stripes less than two hours after their landing, is a memorial to the victors in that war, one of many. There is also a memorial to the Japanese war dead, which the Japanese maintain and visit, one of several in the Philippines; and there is a monument to Philippine-Japanese friendship, again one of several.
John Ayer, 15 February 2001

The capital of the province of Leyte is Tacloban City. The provincial capitol was the seat of the Philippine government after the Allied landing. The houses where Gen. MacArthur and Pres. Osmeńa lived are preserved. The city is also home to several universities, museums, monuments, a Buddhist temple, etc., and many fine beaches. Its population is 179,000.
John Ayer, 17 February 2001 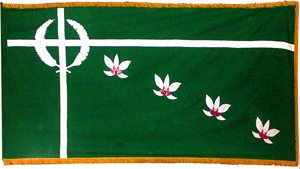 The new flag of Southern Leyte Province is described at http://www.southernleyte.ph/index.php?option=com_content&view=article&id=131&Itemid=180.

"A flag is a visible representation of the feelings, aspiration and values of people through the use of conventional or traditional symbols. Viewed in the context of this definition, a flag thus, becomes the symbol of people and fulfillment of their legitimate dreams and aspirations. As applied to the Philippine setting, it stands for faith in the future and confidence in our capability to undertake the task of nation-building geared towards the creation of a New Society, freed from the inequities and maladies of the old. In a way, it also presents a challenge to the vigilance of all citizens in the desire and obligation towards affirmation of one's dignity as a person. To be able to give the flag the courtesy and affection it deserves, an accurate understanding of the symbolism hidden behind its traditional or commonplace representations becomes a necessity.
In spite of the simplicity of its design, the Southern Leyte provincial flag is no exception. This primer hopes to throw more light into its symbolism.

Southern Leyte has 358,000 inhabitants in nineteen towns, of which Maasin is the capital. The two provinces were divided in 1959.
John Ayer, 17 February 2001

North of Leyte is the slightly larger island of Samar, divided into three provinces, Eastern Samar, Northern Samar, and Samar, also known for distinction as Samar (Western), Western Samar, or West Samar. This island still contains considerable areas where according to report many people have never seen a foreigner. The island is rich in rivers, exotic wildlife, caves, and scenery, and the surrounding ocean abounds with exotic fish, but some of them are hammerhead sharks.
John Ayer, 17 February 2001

Calbayog City, Samar, is, in area, the second largest city in the Philippines. Its population is 147,000. It boasts a waterfall of seven cascades, an archaeological museum, numerous historic sites, and at least one university.
John Ayer, 17 February 2001

Eastern Samar has 376,000 inhabitants on 4340 sq.km. in twenty-three towns, of which Borongan is the capital. It contains the spot where Magellan's expedition first touched the archipelago that Magellan named after his king. Samar (Western) has a population of 641,000 on 5591 sq.km. It is divided into Calbayog City and twenty-five towns, of which Catbalogan is the provincial capital.
John Ayer, 17 February 2001

Northern Samar has 501,000 inhabitants on 3498 sq.km. in twenty-four towns, of which Catarman is the capital. The upper half of its seal bears a map of the province and an image of a sailboat.
John Ayer, 17 February 2001