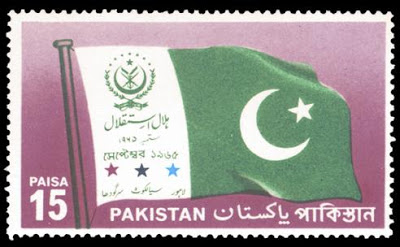 This stamp shows a possible flag called the Hilal-i-Isteqial. It appears that at least several copies of the flag were actually made and raised in a couple of Pakistan cities during May 1967. The stamp was issued on May 15, 1967 about two years after the war. These flags/stamps pertained to the Sept. 1965 Indo-Pakistan War.

Hilal-i-Istiqlal refers to a "civil decoration" award that is issued by the Pakistani government in various orders of merit. The decoration-design appears to have been sewn onto the white portion of the Pakistan flag as a commemorative flag that was awarded to several Pakistan cities that were attacked during the 1965 war. See also: https://en.wikipedia.org/wiki/Civil_decorations_of_Pakistan. Civil decorations of Pakistan were awarded in recognition of gallantry, academic distinction or distinction in the fields of sports or nursing.

The flag of Hilal-i-Istiqial is shown against a graded background of Vermillion red. The Hilal-i-Istiqial emblem appears in white portion of the flag at top. Underneath the emblem the word “Hilal-i- Isteqial” appears in Urdu and below it “September, 1965” in Urdu and Bengali. Below the Bengali lettering appear three Stars in Red, Navy Blue and Light Blue colours representing Army, Navy and Air Force respectively. Under the Light Blue Star is written “Lahore”, under the Navy Blude Star “Siakot” and under Red Star “Sargodah”.

In the release regarding the FDC (First Day of Issue Cover) issuance of this stamp, the Sialkot photograph barely reveals what appears to be the writing that is shown on the flag. “General Mohammad Musa, Governor of West Pakistan, unfurling the Hilal-i-Istiqlal on the Town Hall Sialkot on May 7, 1967” …. “General Mohammad Musa…unfurling the Hilal-i- Isteqial at Jinnah Hall Ground Sargodha, on May 8, 1967.”