Meaning of the Flag

District Flag of Lakki Marwat - NWFP - Pakistan: Lakki Marwat is situated in the South East of the North Western Frontier Province of Pakistan.
The flag of the District LAKKI MARWAT (2:3) in proportion comprises of three horizontal stripes (tricolor) of Blue, Yellow & Green (1:4:1) respectively from top to bottom. The middle broad yellow portion has two crossed axes (Black) in the centre resting on a red doubly twisted ribbon. The uppermost blue stripe stands for sky & the water resources. The central broad yellow portion derives its color from the mustard (brassica) flower which cover the landscape in spring season. The green color of the lowest stripe represent agriculture - the mainstay of the local populace. Crossed (black) axes in the centre of the flag symbolize the urge for self-reliance / labor & self defense.
Dr. Tariq Saleem Marwat, 19 May 2004 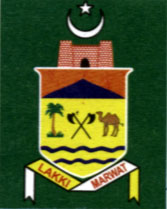 The flag is based on the arms. The coat of arms of the district comprises of a shield with the local landscape, flora & fauna of the area on it. The orange color of the sky stands for the dawn of new era & the blue hill for the mountain range surrounding the district including the Sheikh Badin top. The palm tree & the camel represent the sandy terrain of the district and the endurance & perseverance of the people. The yellow color of the field is derived from the mustard (brassica) flower covering the landscape in the spring. The two crossed axes symbolize the urge for self reliance & self defense. The two wavy lines in blue represent the two main rivers of the area, i.e., Kurram & Gambila flowing across the district. On the top of the shield is a fort (Bala Hisar) - the provincial symbol of the NWFP with the national crest (crescent & star) of the Federation of Pakistan above all. Below the shield is a doubly twisted ribbon or scroll (yellow on obverse & white on reverse side) with "LAKKI MARWAT" inscribed on it in red letters.
Dr. Tariq Saleem Marwat, 19 May 2004

Meenakhel is a sub section of the Marwat tribe (Pashtoons-NWFP-Pakistan), living in Lakki Marwat. The Flag of the House of Meenakhels (2:3) is orange in color with a black castle (Fort) in silhouette along the lower border of the flag. Meena Khan - the founder of the family-built a fort (castle) known as the "Lakki Fort" in the early 17th century A.D. This was the first ever fort built in this area. The Sikhs later on captured it in 1844 and the British East India Company in 1849. The British occupation of the Lakki Fort was the turning point for the East India Company to establish its rule in the Punjab - Northern India. The British later handed over the fort to the Meenakhels, the original owners.

The silhouetted black fort (castle) against the orange back ground stands for the glory of the past. The orange backdrop symbolizes the dawn of the new era. The fort is represented by a wall (parapet) with four battlements on each side of the watch-tower (turret / bastion) standing in the middle & extending up to two-thirds of the breadth of flag.

This flag is very popular among the Meenakhels of Lakki Marwat, especially the youth and can be seen hoisted on many a house. There is a local saying about this flag, " Others have flags on their forts while we have a fort on our flag".
Dr. Tariq Saleem Marwat, 19 May 2004 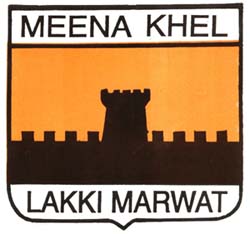 The flag is based on the arms.

Tribal Flag of the Marwats

"Tribal Flag Of The Marwats"

A green flag containing two crossed golden axes and with two wide stripes at the bottom and fly, the first one white and the second one black.
Jorge Candeias, 6 February 2005

The majority of Marwats live in the District Lakki Marwat of the North Western Frontier Province of Pakistan. The black and white colours stand for the traditional political factions "Tor Gund" & "Speen Gund" - The Black & White Factions. The green color stand for prosperity, fraternity, peace and the bright future. The two axes stand for self reliance & self defence.
Dr. Tariq Saleem Marwat, 14 June 2004