Although FOTW page shows the international flag of Łambinowice, Chad and Romania (by Chrystian Kretowicz 2002) and that flag appears to be correct according to the description in the Law of the commune (resolution # XXIX/191/05 dated April 28, 2005), which describes the flag exactly as it is written on FOTW page, it seems something had happen since that, and, perhaps, Lambowice council persons got frustrated with Chad and Romania's unwillingness to change their flags, so they decided to change their own, stretching the yellow part of it.
It is clearly illustrated on the recent photograph of the Commune's Office displaying the flag with uneven bands, just next to the flag of the European Union.
There is no other evidence on the net to corroborate the news of the change, but, IMVHO, the picture is worth a thousand words - don't you agree ?
Chrystian Kretowicz, 23 Oct 2008

LAMBINOWICE Commune - NYSA County - OPOLSKIE Voivodship
(proniunced < wambino'vitze>)
Old German name: Lamsdorf (the site of big POW camp in WW I ( for French soldiers) and even bigger camp during WW II - 300,000. Also a Polish camp for Germans to be expelled west in 1945) - not a very happy place.
This site has a short description of the flag:
"three vertical bands - Blue, Gold, and Red. The blue band is always at the hoist."
Now it is clear why Romania is adding its Arms to the flag. If Tchad will follow, nobody ever will get them mixed-up with Lambowice.
Chrystian Kretowicz,  27 Nov 2002 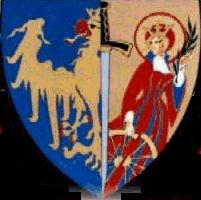 This site shows the elaborate Arms of the Commune:
Coat of Arms - right side - half of the Piast Eagle - in the middle - half of the sword - left side - image of St.Catherine of Alexandria symbolizing martrydom.
Distinguishing the Arms are two golden, Upper Silesian, eagles supporting the shield.
On top of the shield there is another, small shield, red, with two naked swords and a burning torch. This is to commemorate the memory of those fallen in World Wars.
Chrystian Kretowicz,  27 Nov 2002