Apparently the flag below was not the final version, see the county website - with a flag: three vertical stripes blue - yellow - green, with 7 6-pointed blue stars topcenter. No dates mentioned AFAIK. And no banner.
Jarig Bakker, 26 Feb 2008

This is a final version of the county-flag approved by the County Council after the previous design was rejected by the Ministry of Internal Affairs which consulted the Heraldic Commission on that matter.
The corrections were done by the local artist, Ms.Bozena Perkiel, and the flag and Coat of Arms were introduced officially during County Council's meeting on 31 December 2001.
Old German name: Groß Strelitz.
Chrystian Kretowicz, 20 Oct 2002 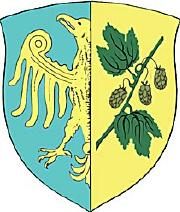