Zabrze is in Zabrze county, part of the big agglomeration of Katowice. It was also known as Old Zabrze (Alt Zabrze); in 1905 five commune amalgamated to form the new Zabrze commune. It was renamed Hindenburg in 1915, but got its old name back in 1945.
Gunnar Staack, 16 Oct 2000

Biskupice (Biskupitz), which is now a Zabrze subdivision, was first mentioned in 1243 as Biscupici dicitur cirka Bitom.
Zabrze (later Old Zabrze) was mentioned in 1295-1305 as Sadbre sive Cunczindorf. Beginning in the Late Middle Ages, the local Silesian Piast dukes invited German settlers to the territory resulting in increasing German settlement of the area.
Zabrze was inherited by the Habsburg Monarchy of Austria in 1526 and was annexed by the Kingdom of Prussia during the 18th century Silesian Wars. In 1774 nearby Dorotheendorf settlement was founded. With the first mine opened in Zabrze in 1790, the town became an important site for mining in 19th century. When Upper Silesia was partitioned between Poland and Germany in 1921, Zabrze remained in Germany. The settlement received its city charter in 1922

Zabrze was renamed Hindenburg in 1915 to honor Generalfeldmarschall Paul von Hindenburg; the new name was used until May 19, 1945. After the city became part of Poland in that year following World War II, the original name, Zabrze, was restored and most of the remaining German inhabitants were expelled according to the Potsdam Conference.

Arms were originally adopted in 1927 after the Prussian Ministry of Internal Affairs approved the design of Father Alfred Brockel.
The brick towers and the gear wheel were to symbolize the heavy industry of the city ( the city was often described as a "town of the brick towers" due to its characteristic architecture).
These Arms were abolished by the Polish communist government in 1948 and from 1960 to 1990 the Arms shown on FOTW.
In 1990, the old Arms were restored (with slight modification) by the self-governing City Council on September 26 (and the flag was adopted too).

Flag: is composed of three equal horizontal bands: red-blue-yellow with the Arms in the center of the flag.
Chrystian Kretowicz, 22 Dec 2008 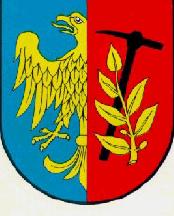