This city of 56,316 inhabitants was founded in 1722 and became autonomous (as a municipality, I suppose) in 1793. The text does not say much about the flag... In the Coat of Arms, the yellow (or rather gold) represents the [rising] sun, Humacao being located in the eastern part of the island. Green stands for the tropical nature of the valley, but also the Native Indian heritage. Humacao is in east Puerto Rico
Thanh-Tâm Le and Jarig Bakker, 12 January 1999

Concering "pendiente" - in Spanish it can be an adjective (hanging, depending) or a noun (earring). I have never seen it used in a flag context.
Santiago Dotor, 1 Febuary 2000

The flag of Humacao consists of three stripes with the middle one narrower: colors are yellow/red/green.
Blas Delgado, 6 Febuary 2000

Humacao - Its colors are based in the Coat of Arms: yellow, red, and green. Yellow (gold) represents the color of the Indian Chief Humacao's crown, and Jesus' monogram. Red is for the small shield, and green represents the arrows color.
Blas Delgado, 16 April 2001

wrong flag based on lexjuris site
by Thanh-Tâm Le, 12 January 1999 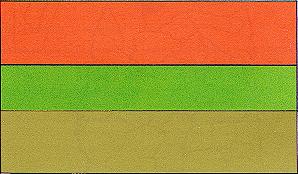 The flag of Humacao consists of three stripes with the middle one narrower: colors are yellow/red/green; not yellow/blue/green
Blas Delgado, 6 Febuary 2000

The coat of arms consists of two colors, gold and green. The gold represents the sun, Humacao is located in the island were the sun rises. Green symbolizes our native Indian heritage as well as the natural tropical valley where the city is located. The shield itself represents Humacao's native and Indian name origin and the Christian backbone of the town. The crown above the shield is standard of all cities and towns close to Humacao area ordered by the Royal Spanish Crown. It also represents Chief Jumacao's royalty. The other two components of the shield are the two arrows and a small shield. The arrows represent the two wars Jumacao fought against the Spanish during the XVI century. The small shield in the center represents the name of Humacao's Catholic Church; Dulce Nombre De Jesús. The shield was designed by Roberto Biascochea Lota in 1975 and was adopted by the Municipal Assembly that same year in November.
Source: <www.linktopr.com>.
Nelson Román, 19 July 2004