This city of 26,595 inhabitants was founded on August 25, 1793. The flag of Peñuelas was designed through a project of the Institute for Puerto Rican Culture. The intense yellow field stands for the sun, symbol of physical life. The purple cross symbolizes Christianity and its ecclesiastic order, and represents spiritual life. The arms of the cross extend up to the sides of the rectangle, as a symbol for the universality of Christianity and the Church. This project for a flag of Penuelas was created in 1974.
Thanh-Tâm Le, 3 February 1999

The crossbeams of the flag on pueblos-de-puertorico.com site (defunct), are much thicker than the ones on top, and they are blue, not purpura (violet?) as on lexjuris site . According to that site it was designed by the 'Instituto de Cultura Puertorriquena' in 1974. Penuelas is in south Puerto Rico, 12 km north of Ponce.
Jarig Bakker, 3 February 2000 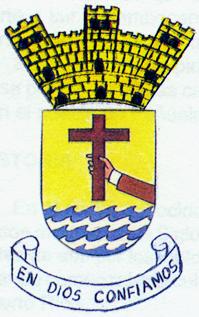