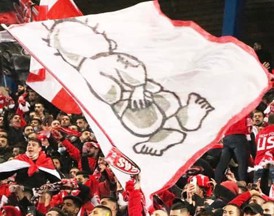 A white-field flag (with a red "frame" border) with the widely seen and popular pro-Palestinian icon "Handala" being waved (c. late 2021?) by the "Ultras Sakhnin" (soccer-team fan-club) of the "Ittihad Abna Sakhnin" (soccer team) in Sakhnin, Israel -- located just south of the Golan Heights, and which has a prominent Arab community. According to Wikipedia: "Handala (also Handhala, Hanzala or Hanthala), is a prominent https://en.wikipedia.org/wiki/National_symbol and https://en.wikipedia.org/wiki/National_personification of the https://en.wikipedia.org/wiki/Palestinian_people. The character ...took its current form in 1973....[Handala] remains an iconic symbol of Palestinian identity and defiance. The character has been described as "portraying war, resistance, and the Palestinian identity with astounding clarity". The name comes from Citrullus colocynthis..., a perennial plant local to the region which bears a bitter fruit, grows back when cut and has deep roots." This flag was waved during a soccer match not as a soccer-team flag, but most likely just to champion the pro-Palestine independence movement at a large public soccer match.