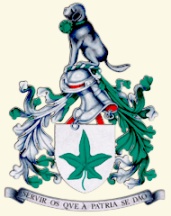 image by Jorge Candeias, 18 Dec 2003, from the Portuguese Army site

Description: Shield barred and counterbarred of sable and silver.
Symbology: The bars suggest the compartments adecuate to the ordered and systematic gathering of massive copies of documentation, in order to guarantee, in the long run, its easy consultation. The tinctures mean: 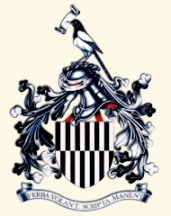 image by Jorge Candeias, 17 Dec 2003, from the Portuguese Army site 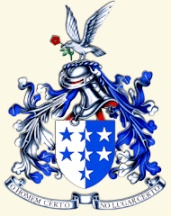 The institute is a boy school operated by the Portuguese Army, providing all levels of primary and secondary education (6-17 y.o.) to prospective personnel. It was founded in 1911, originally to cater for the (male) children of sergeants and servicemen of the Navy and Army (no Air Force back then); officers' children attended the separate, pre-existing Colégio Militar.
Like every other unit of the Portuguese Army, this school has a coat of arms and the correct guidon is its Banner of Arms. It is Azure above a two-flame lamp Or flaming Gules a representation of the feathered cap crest of the school's parade uniform and on a chief Argent three hurts (kind of roundels) Azure. Helmet; wreath and mantling Azure and Argent and for crest a lion holding a book and a sword; scroll with motto "Querer é Poder" ("Will is Might", ; and collar of the Order of St. James. (editorial note:or to wish is to master)
The Banner of Arms is square with the shield charges on it. The arms were devised Col. Guerreiro Vicente, one of the best Portuguese Heraldists (though for me this is not one of his best arms) and as in current use drawn and coloured by Mag. José Colaço, heraldic illustrator extraordinaire.
The lamp stands for education, for it is a school, the feathers are the best known token of this institutions, and the chief comes from the Castro family CoA (Argent six roundels Azure in two pales), for the school's patron is D. João de Castro.
Though this schooll had previously a very different guidon, the Bannr of Arms is now in regular use (probably much later after the adoption of the CoA).
António Martins-Tuválkin and Jan Mertens, 19 July 2007

Made from a table top flag about 10 cm to the side I could observe in detail; photographic evidence seems to validate the details of this design and furthermore hints at continued use till the 1980ies or even the 1990ies.
It is a dark red guidon with a golden cogwheel between four yellow (yes, golden and yellow in the same design) armillary spheres. Cornerless bordure separated from the main panel by a yellow line filled with four light and three plus to half dark brown triangles on each side and corners also dark red filled with the monogram "PE" in interwinned script capitals -- yellow "P" and rosy "E".
António Martins-Tuválkin, 21 July 2007

Finally, there's the flag of the Alumnus' Parents' and Benefactors' Association, Associação dos Pupilos do Exército. Unlike the current and previous flags of the school itself, this one is a plain white cloth with a logo on it; not surprisingly, the said logo is tacky and uninspiring: It is the umptieth variation of the national arms on a pentagonal shield with concave sides full with a motto scroll (the same "querer é poder" as the school) the shiled of the national arms filled with "APE" in black capitals on a white background, two crossed swords behind the armillary sphere and a wreath of golden laurels around and below it all. Under the logo a scroll reading "Associação dos Pupilos do Exército". I've seen two slightly different variants of this flag, one a table top rigid guidon like flag, the other a 90 cm hoist "real" flag. These differences lie in the depicting details of the flag elements.
António Martins-Tuválkin, 21 July 2007

Argent a chief and a pale Azure. Argent/silver stands for balance between the needs of the Army and the interests of the national treasury; the "T" refers to the duality of book keeping in- and out-put columns.
The new coat of arms was adopted by the Portuguese Army Chief of staff on 17 June 2009, authored by Lt.-Col. Pedroso da Silvaand illustrated by Master painter José Estevéns Colaço, of the Portuguese Army Heraldry Cabinet.
Source: "Despacho de S. Ex. o General Chefe do Estado-Maior do Exército, de 17 de Junho de 2009".
António Martins-Tuválkin, 18 Feb 2010

The Military Museum of Elvas is a unite of the Portuguese Army, and as such recently adopted a CoA. This was issued by the Heraldry Office of the Portuguese Army (Gabinete de Heráldica do Exército), devised by Pedroso da Silva (Lt.Col.) and painted by José Colaço (MA).
The shield blazon is: Gules a pale Vair between two swords Or set in pale and pointing upwards.
his design is usable* as the units flag, but I have no positive information of this use. Since the museum has no personnel which could form on a parade and hence no colour/Banner of Arms was issued. The remaining blazon does not show on the flag design, as usual, but Heraldry enthusiasts may find it of interest.
António Martins-Tuválkin, 21 Jan 2008