It is a fairly typical Portuguese communal flag, with the coat of arms centred on a plain white field (village rank).
Source: I spotted flag and arms in front of the town hall on 26 September 2013.
Klaus-Michael Schneider, 25 July 2014 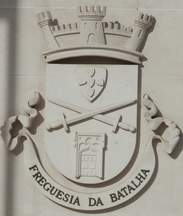 The arms are Vert two swords Argent with hilts Or crossed per saltire and pointing upwards, in chief an inescutcheon Argent charged with five plates Azure set in cross, each one charged with five besants Argent set in quincunx (quina), those in flanks pointing inwards, in base a renaissance gate with a threefold arch abovecontaining a multicentred arch, all in gold. Mural crown Argent with three visible towers (village rank) and white scroll reading in black upper case letters "FREGUESIA DA BATALHA".
Meaning:
Probably the whole ensemble is dedicated to Nuno Álvares Pereira aka São Nuno de Santa Maria, the winner of the battle of Aljubarrota, who lived in a monastery during his last years. The crossed swords are surely related to the battle. The quina is one of Portugals national emblems.
Source: municipal webpage (in Portuguese only)
Klaus-Michael Schneider, 25 July 2014 / 21 Oct 2014