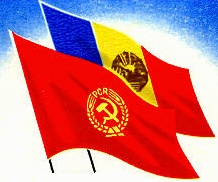 The PCR flag consisted of a simple hammer and sickle inside a wheat wreath containing the letters PCR.  Located on a stamp displayed at http://www.h-u-m-rueegg.li/marken-ru.htm. István Molnár, 3 March 2007

I was watching a historical documentary on the TV tonight where I saw a flag of the Romanian Communist Party hoisted behind Ceausescu on the occasion of one of his last speeches before his fall. The flag was hoisted behind him, together with the Romanian national flag of the time. It was too quick a glance to get the details right, but the flag was red, with the emblem in the middle - just on the same place where it was the coat of arms on the next hoisted Romanian flag, and the emblem was of the same size. It consisted of a golden wreath of the same basic shape (oval) as the national emblem, but was not made of the same "corn" (the grains were much bigger). In the middle was the hammer and sickle symbol in the same position it is usually found on Soviet flags. I do not remember noticing the five-pointed star, but as I said, it was a quick glance.
Željko Heimer, 2 December 1999

According my Sources (basically Flaggenmitteilung) flag was red with golden wreath and within a golden h&s (no star). The union of wreaths is made by a ribbon with the romanian national colors. In the upper part (between both sides of the wreath end) until 1965 were the letters PMR and later PCR. wreaths show in circular shape like in the post stamp.
Jaume Ollé, 8 December 1999