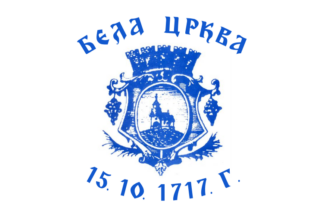 Bela Crkva (Hungarian, Fehertemplom; German, Weisskirchen; Romanian, Biserica Alba; unofficial website) is a town (12,317 inhabitants in 1991) and municipality (25,690 inh.; 35,345 ha) located in the valley of Nera, in the south-eastern corner of Vojvodina, 96 km east of Belgrade and close to the border with Romania. The municipality is constituted by the settlements of Kaluerovo, Kusić, Krusčica, Vrahcev Gaj, Crvena Crkva, Banatska Palanka, Kajtasovo, Grebenac, Dupljaja, Jasenovo, Banatska Subotica, Dobričevo and Češko Selo.
Bela Crkva is limited in the east by the Carpath mountains and opens to the Pannonian plain in the West. The municipal territory is watered by rivers Danube, Nera, Karas, the Danube-Tisa-Danube Canal, and has seven lakes nicknamed "The Pearls of Banat", which explains the nickname of "Venice of Vojvodina" given to the town. Bela Crkva means literally "White Church", a name that refers to the old church built by the early settlers of the place.
Bela Crkva is known for the elaborate baroque architecture of its houses, the "Flower Carnival" and fruit and wines.
The area known as Deliblatska Peščar dates back from the withdrawal of the Panonnian Sea; it is the only dune area inside Europe, harbouring a significant wolf population.

The region of Bela Crkva was settled very early, as proved by archeological foundings from the Bronze and Iron Ages. After the fall of the Roman Empire, the region was settled by the Sarmats, from which several artifacts have been excavated in Bela Crkva. In the 6th century, the Sarmats were succeeded by the Avars and the Slavs, who, surprisingly, have left very few archeological remains. The south-eastern Banat was later occupied by the Bulgars and later by the Hungarians (9th century). In 1522, the Turks seized Temisvar (today Timişoara, in Romania) and ruled the area. War broke out between the Austrian and Ottoman Empires in the 17th century; in 1716, Prince Eugen of Savoy seized Temisvar and appointed Earl Merci as Governor. Merci expelled the Turks form the region and organized a massive German colonization of the liberated territory. Bela Crkva was first founded by Germans, followed by Serbs, Romanians and others. Germans remained the majority until the end of Second World War. Bela Crkva was a free military town located on the military border of the Empire and protected by a Wallachian-Illyrian regiment set up in 1774. In 1872, the military border was suppressed and Bela Crkva was reincorporated to Hungary, with a civil administration. In 1918, the town was incorporated into the new Kingdom of the Serbs, Croats and Slovenes. Most of the woods and agricultural lands were allocated to Romania and the economy of the town declined. Most Germans left after the Second World War.

The flag of Bela Crkva (photo) is prescribed in Article 6 of the Municipal Stututes (text) as white with the municipal coat of arms in blue in the middle with the year of the foundation of the town below.

According to Széll (Városaink neve, címere és lobogója [szs41]), the former flag of Bela Crkva is blue with a white cross throughout.
Széll's book shows the flags of several towns formerly held by Hungary. The book is our only source of these flags, but it is not clear as to what period these flags were used as claimed by the book. I doubt very much that they were used during the time of Austria-Hungary. It seems very much more like they were designed in 1941 - but it is not even clear weather the designs shown in Széll's book are just proposals or if they were ever prescribed in any formal way and after all whether they were used. At least for the moment, I believe that the former flag was in use at most in years 1941-1944.