The flag of Kikinda is prescribed in the Town's Statutes published on the 6 February 2019 in the town's official gazette, No. 4 (text), as:


Divided blue and red, a golden lion superimposed, raising in the front right paw a silver sword and in the left a black perch holding a male's shaven head with a black moustache.

The flag design is a modification of the blazon of arms of the Privileged District of Velika Kikinda (Wikipedia), an autonomous entity within the Habsburg Monarchy, which existed from1774 to 1876, its administrative center having been the town of Velika Kikinda, present-day Kikinda. The difference between the two designs is inthe field, which is bicolor blue-red in the modern flag and plain red in the ancient arms. The modern design must have been derived from a flag which appears as a charge in the arms of the village of Melenci, which was one of the municipalities within the District (nowadays, it makes part of the City of Zrenjanin): there, an armored knight carries a long bicolor flag, blue over red, with the arms of District near the hoist.
A video clip displaying all of these arms can be viewed here or here, with a reproduction of the arms of Melenci visible @0:13-0:15 in the center of the video frame, the obverse side of the flag of District, bearing its arms on blue field, visible @0:42-0:48, @2:02-2:09 and @2:51-3:01, and the reverse side, bearing the arms of Velika Kikinda municipality (essentially the same as the present arms of the City of Kikinda) surrounded by the lesser arms of the other municipalities (those of Melenci being the second topmost on the dexter side) all on blue field, visible @0:29-0:41, @0:49-1:05, @1:25-1:52 and @2:20-2:50. A photo of the flag reverse allows for a better recognition of the arms of Melenci.
It shall be noted that two other arms, those of Mokrin (topmost dexter) and Karlovo (fourth topmost sinister), display Serbian tricolors as the charges. However, the current flag is actually a copy of the original one, which was destroyed during the Hungarian Revolution of 1848, the copy being made some 20 years later, so the charges displayed in the original flag, which was created in 1800, might have actually been similar to the one still seen in the arms of Melenci, only to be mistaken for Serbian flag during the copying. Such an error was typical for the 19th-century paintings, which often included Serbian flag in depictions of events which preceded its creation.

Due to all of the above, the current flag of the city was clearly adopted to commemorate the Privileged District, and is even sometimes attributed to it, as stated in the municipal website, although it clearly differs from the flags appearing in those arms, which may have been used as the district flags, although there is still no positive evidence for that either. 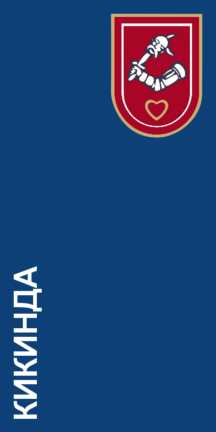 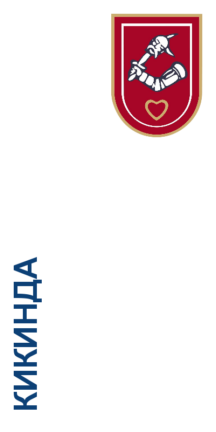 Kikinda has a flag triptych (photo), made of three vertical, red, blue and white flags, each charged with the municipal coat of arms in the upper right corner and the name of the town written along the lower part of the fly.

These flags were charged with the contemporary version of arms, which displayed a red heart upon a red field.The heart was outlined either black (the color of all outlines, although contrary to the rules of heraldry in this particular case) or gold (a heraldically correct fimbriation). However, the design was based on reproductions of old images, neglecting the fact that in the originals, the color shade of the heart actually differs from that of the field, suggesting that the heart might have originally been painted over the field with a different color, which has changed by age. The difference is visible in the flag of the Privileged District of Velika Kikinda (photo.
There are also depictions in which the difference is even more pronounced, where the heart has darkened much like the other charges, suggesting that it might have actually been silver, just like the armor and sabre, but for some reason, it not only darkened but also lost much of the original metallic pigment, allowing the field color to be seen through it and misleading to the conclusion that the heart was meant to be red. There are certainly many other similar examples, many of which are still not online, and they were all taken into account when defining the current blazon, in which the heart was described as silver.

Other reported flags of Kikinda

Most towns in Vojvodina have official flags and arms and due to historical influence have much better regulated usage then the rest of Serbia. However, some still do not use official proposed flag but just apply the coat of arms on single color background. As far as I know, Kikinda does not have official flag but a pretty unique coat of arms. Some variations of the arms applied in center or shifted towards the hoist in middle or upper canton on various color background (red, blue, white) are reported. In some cases several flags with different colors at the same time. One photo shows Serbian red, blue, white order with the coat of arms in upper hoist canton.
I have seen at least one photo with the white background and Cyrillic inscription "ОПШТИНА КИКИНДА" (Municipality of Kikinda).