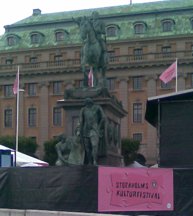 Some days ago (actually on the Swedish National Day, 6th of June, which also is Flag Day in Sweden) I saw some people in Stockholm sporting a white flag with a red heart on it (rather like the Red Cross flag in shades and proportions). I don't know what it stands for, but I got the feeling it was a flag to celebrate 'Love Stockholm', the celebratory time starting that day and leading up to the marriage of H.R.H. Crown Princess Victoria to Mr. Daniel Westling next weekend (on the 19th of June).
Elias Granqvist, 13 June 2010

Many people seen on TV watching the newlyweds are having handwavers with a "Swedish flag" on one side and white with a red heart and some text on the other. To honour this day, the Swedish public service TV channel SVT1 has added a crown to its logo. It looks like a simpified version of the heir apparent's crown.

Lots of troop colours can be seen too.

We see the Crown Princess flag with the lesser state coat of arms in the middle of the cross and royal pennant over it - the flag and the pennat are together the sign for the heir apparent. In the back of the sloop Vasaorden is the usual naval flag. The monogram on the royal sloop is the monogram of King Gustaf V, who was king when the present sloop was built in the early 20th Century.

The carpet which the bride and the groom will walk on from the boat to the royal castle is in light blue like the colour of the Royal Order of the Seraphim, Sweden's most prestigious state orden. Prince Daniel was created a knight of the order just in the minute after the wedding. Common Swedish people can't recieve the order, it is just given to royalty and to foreign heads of state.

The joint monogram of the Crown Princes and Prince Daniel is also seen on the TV screen. The TV commentator calls the crown over it a ducal crown, but it is not, it is the crown for the heir apparent (who is also a duchess, but that's beside the point). By the way, Prince Daniel is now also duke of Västergötland, joint with his wife.
Elias Granqvist, 19 June 2010

The flag now in use is new, as reported by me on the 29th of May (see under the headline Usage at the page about the royal flag of Sweden). I remember from when they have flown the flag at the Royal Palace in Stockholm, earlier flags with the smaller arms acctually had a smaller white panel, a panel just as wide as the middle of the cross - and that's how it has been drawn earlier too.
Elias Granqvist, 20 June 2010