Mnisek nad Hnilcom was originally called Einsiedel, the full German name for the town was Einsiedel an der Gollnitz, the last word referring to the Gollnitz (Slovak Hnilec) River which flows through the town.  The Hungarian name was Remete or Szepesemete, where Szepes is the name of the county Zips in German, Spis in Slovak.  Founded around 1255, as early as 1322 the town was a gold-mining settlement belonging to the larger town of Gollnitz (Gelnica).  In 1465 it was acquired by Spis castle, not far to the northeast, and continued existence as a mining town of some size.  In the 18th and 19th century Einsiedel had several mines, water and steam driven hammers (blacksmith shops), a steel foundry, and a mining office.
William J. Theiss, 20 Aug 2006 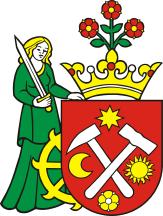 In accordance with seal from year 1705:
There are little 2 silver mine hammers in saltire on a red shield with an  8-pointed golden star at the top, golden sun on the right side, a golden moon on left side, and under the hammers a golden rose.
William J. Theiss, 20 Aug 2006