Image according to the Heraldický Register Slovenskej Republiky, I, 2000 - Trenčín, Trenčín district, Trenčín region - adopted 1991.
The Flag of the Town consists of a quartered red and white field. It is of a rectangular shape, ended with a trimming spreading up to 1/3 of the flag length. The length to width ratio is 3:2.
Jarig Bakker, 24 Apr 2000

The Pennant of the Town is made by changing the length and width, as well as by the way of hanging it on a pole.
Jarig Bakker, 24 Apr 2000

The Mayor's Banner is in the form of an armorial flag on which the coat of arms of the town is projected onto a blue rectangle. The armorial flag is bordered with a margin of town colours - red, white and blue. The Mayor has the right to use the banner on festival occasions.
Jarig Bakker, 24 Apr 2000

The flag from 1807. The slogan says 'ist hoc armatos donat cives Trenčhinienses'. On the reverse side of the flag is depicted St. Franciscus Xaverius and the city view.
Jan Kravčík, 15 June 2000 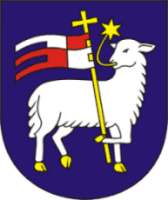 The Coat of Arms of the Town of Trenčín represents a blue field in a shield, in which a silver [white] lambkin facing to the left can be found. It carries a quartered red and white flag on an ended golden [yellow] pole. A hexagram fixed to a golden [yellow] ribbon is above its head. The length to width ratio is 7:8.
Jarig Bakker, 24 Apr 2000