The Umbutfo Swaziland Defence Force was formed in June 1979 and operates a small number of light transport planes and helicopters. Military Aircraft Insignia of the World (Cochrane and Elliott, 1998) [cos98] reports the national flag is found on tail and since its drawing shows the shape of the IAI 201 tail based on the photo at http://www.airliners.net/open.file/086789/L/ 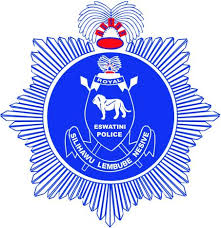 The flag of the Royal eSwatini Police (formerly Royal Swaziland Police) has a dark blue background with the national flag in the canton and the emblem of the police service, as illustrated above, outlined in white in the fly.