The flag of Doğubayazıt (photo) is white with the municipality's emblem in the center. "Belediyesi" means "Municipality".

The new logo was adopted in November 2014 through a public contest. The selected design was explained as follows:
"Mount Ararat, which is the highest summit in Europe, a natural wonder for mountaineering and sports, and home to Noah's ark, represented at the top of the mountain, The green stripes represents the Doğubayazıt plain while the blue stripe represents Lake Balık. İshakpaşa Palace is featured in the area inside Mount Ararat; the great Kurdish philosopher and poet Ahmad Khani worked there as a clerk. All these charges are integrated with the brightness of the sun rising in graphical integrity and simplicity and with the clear sky."
Submissionz were received from 20 May to 15 July 2014. The jury appointed by the municipal administration shortlisted six proposals to be evaluated by the public and the jury.
The selected design is proposal No. 3, with the addition of "ŞAREDARİYA BAZIDE", in Kurdish, "Bazîd Municipality", in the orange semi-circle.
[Doğubayazıt Halkın Sesi, 20 November 2014; Doğubayazıt Gazetesi, 15 August 2014]

The former flag of Doğubayazıt (photo, photo, photo, photo) was white with the municipality's emblem in the center. "Belediyesi" means "Municipality". On the flag, the blue background of the emblem is much lighter than on the stand-alone emblem.

The emblem features the town's skyline with Mt. Ararat, surmounted by Noah's ark in the background. The lake on the right of the emblem must be Lake Balık (34 sq. km), a lava-dammed freshwater lake.
The main building is İshak Paşa's Palace, whose building lasted from 1684 to 1785.
The truck, the road and the border pennant recall that Doğubayazıt is located on a main road to Iran. The Gürbülak border post is the end of European route E80 (6,102 km), which starts from Lisbon (Portugal) and crosses Spain (Burgos), France (Toulouse), Italy (Genoa, Rome), the Adriatic Sea, Croatia (Dubrovnik), Montenegro (Podgorica), Serbia, Kosovo (Priština), Bulgaria (Sofia), and Turkey (Istanbul). 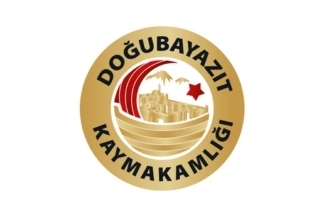 Flag of the Doğubayazıt district government - Image by Tomislav Šipek, 13 May 2020

The municipal football club, Doğubayazıt Belediye Spor, plays in the Ağrı amateur first league.
The club's flag (photo) is green with two red stripes on top and bottom, separated from the green stripe by a white fimbriation, and the municipal emblem (similar to the self standing emblem) in the center, surrounded by a white ring. The club's name is written in green capital letters in the red stripes.