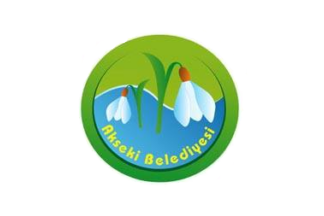 The flag of Akseki is white with the municipality's emblem in the middle. "Belediyesi" means "Municipality".

The emblem of the municipality features two snowdrops. The plains surrounding Akseki are the homeland of the endangered Anatolian, or giant, snowdrop (Galanthus elwesii Hook f.), mostly used as a decoration plant and as raw material in the cosmetic and medication industries. Known as "the wedding gown of the Taurus", the Anatolian snowdrop is under threat of extinction because of careless picking. The protection by-law adopted in 1991 by the Ministry of Agriculture and Rural Affairs seems to be quite ineffective. A ban on snowdrop picking was even imposed from 2004 to 2008 to allow restoration of the plant populations. Picking is now permitted only during short periods.
[Today's Zaman, 20 March 2008]

The flag of Cevizli (photo) was white with the municipality's emblem. "Belediyesi" means "Municipality".