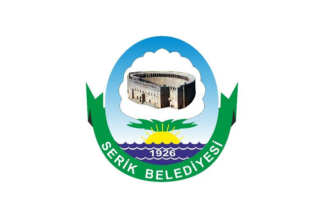 The flag of Serik (photo, photo) is white with the municipality's emblem. "Belediyesi" means "Municipality".
The emblem of the municipality features the Roman theatre of the ancient town of Aspendos.

The ancient city of Aspendos (modern city of Belkis, ancient city of Pamphylia) is located on Turkey's southern Mediterranean coast forty-seven km from the modern city of Antalya. Its spectacularly well-preserved theatre is one of the best examples of Roman theatre construction in the world. While there was probably an earlier ancient theatre on the site, it was completely obliterated by the Roman theatre, which was built during the reign of Marcus Aurelius (161-180 AD). A statue of the building's architect, Zeno, stands in the south parodos. The inscription under the statue records the thanks of the people for the gift of the theatre and says that Zeno was given a large garden near the stadium for his work. Inscriptions in Greek and Latin on either side of the skene read that the wealthy brothers Curtius Crespinus and Curtius Auspicatus built the theatre and dedicated it to "the Gods of the Country and the Imperial House.
In the 3rd century AD a parapet was built between the orchestra and the cavea to protect the audience from gladiatorial and wild animal shows. The theatre continued to be used through the Byzantine era and into the Seljuk Turkish period. The Seljuk leader Alaeddin Kaykabat I renovated the theatre in the 1200s AD, decorating it with painted tiles and turning it into a palace. The Seljuks built the tower-like entranceway over the central outer door of the skene, which remains today.
The theatre at Aspendos is without doubt the best-preserved example of "eastern" Roman theatre construction in the world. Bieber identifies distinctions between "western" and "eastern" Roman theatres citing the straight, multi-storied scaenae frons with a higher, seven foot, stage as characteristic of "eastern" theatre construction techniques found at Aspendos, Priene, Miletus, and Termessos. These Hellenistic influenced theatres in Asia Minor are in contrast to the "western" theatres of Italy, Spain, France, and Africa which have recessed niches for the doors in the scaenae frons and a lower, four-foot high stage.
[The Ancient Theater Archives, Whitman University]

The flag of Belkıs is white with the municipality's emblem. "Belediyesi" means "Municipality". Aspendos was an ancient Greco-Roman town.

The flag of Boğazkent (photo) is white with the municipality's emblem. "Belediyesi" means "Municipality".

The flag of Kadriye is white with the municipality's emblem. "Belediyesi" means "Municipality".

The flag of Yukarıkocayatak is white with the municipality's emblem. "Belediyesi" means "Municipality".