The flag of Didim (photo) is white with the municipality's emblem, which features two columns representing the ruins of Didyma, the major Anatolian sanctuary dedicated to Apollo. "Belediyesi" means "Municipality".

Didyma was originally a pre-Greek cult center with a spring and sacred grove. The Ionian Greeks adopted and Hellenized the center and by the 7th century B.C. the fame of its oracle had spread to as far as Egypt. The earliest temple of Apollo on the site was an unroofed Ionic building enclosing the sacred spring and a Naiskos. It was completed in the first half of the 6th century B.C. A second and larger temple on the same spot was destroyed by the Persians early in the 5th century B.C. while it was still under construction.
Little is known about activities at Didyma during the 5th and 4th centuries B.C., it it seems to have suffered a decline. The sanctuary and the office of the oracle was revived at ca. 311 B.C. when the sacred spring reappeared (or was rediscovered) on the occasion of a visit from Alexander the Great. In the following decades Seleucus embellished the sanctuary and commissioned the new Hellenistic Temple of Apollo. The sanctuary grew in wealth and fame and work on the temple continued for the next 200 years.
In 278 B.C. the sanctuary suffered under the raids of Gauls, but construction work on the temple was resumed. At 70 B.C. the sanctuary was sacked by pirates and work on the temple stopped. The sanctuary continued to function and in A.D. 100. Trajan commissioned a new paved road to the sanctuary from Miletus.
By the 3rd century A.D. Christianity had become well established in the Miletus area and the sanctuary at Didyma fell into disuse. At ca. A.D. 262 the Temple of Apollo (which had never been completed, despite five centuries of service), was converted into a fortress against the invading Goths.
[Perseus Project, Tufts University] Former flags of Didim - Images by Tomislav Šipek, 8 May 2020 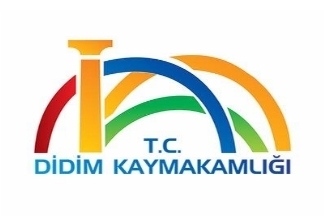 Flag of the Didim district government - Image by Tomislav Šipek, 9 May 2020 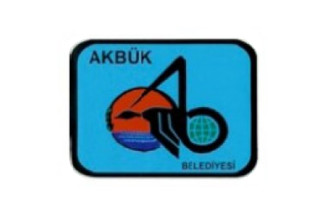 The flag of Akbük (photo) was white with the municipality's emblem. "Belediyesi" means "Municipality".