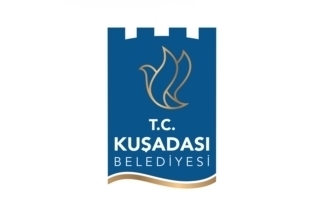 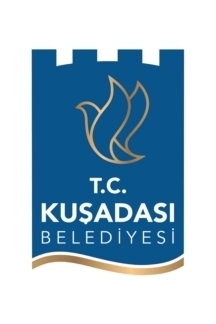 The flag of Kuşadası, used either horizontally (photo) or vertically (photo), is white with the municipality's emblem.

The former flag of Kuşadası was white with the municipality's emblem.
On the flags, the emblem is made of two adjacent, light blueish violet (photo), or white (photo), rectangles with a dark blue border. The left rectangle is charged with the silhouette of a dove, with four pairs of feathers as wings. The bird might refer to the name of the town, which means in Turkish "Bird's island". The colours of the pairs of feathers are, from top to bottom, yellow, orange, turquoise, and blue. The right rectangle is inscribed with the blue writing "KUŞADASI BELEDİYESİ" (Kuşadası Municipality).
The flag also exists with the bird without border, beneath it the municipality's name (photo).

The former table flag of Kuşadası (photo) was white with the municipality's emblem in a seal form.

Ege Ports - The Port of Kuşadası

The flag of Ege Ports is blue. Above are three waves in different shades of blue, a bit more greenish than the base colour. Beneath the waves is an inscription of white capitals, separated by blue horizontal lines: "EGE" / "PORTS" / "KUŞADASI" (in smaller letters).