The two emblems recall that Hizan is the cradle of Karakovan honey, the bees thriving in a mountainous environment, far away from pesticide-sprayed crops.
Most honey produced around the world comes from bees who have been fed syrup to boost productivity. Karakovan ("black hive") honey - on the other hand, aims for quality over quantity. The name derives from the hollowed-out tree trunks that shelter the hive, keeping out light and the meddling hands of beekeepers. Left to their own devices, the bees must forage for food from the smorgasbord of Black Sea flora available. This variety in their diet creates a complex and delectable honey you won't find elsewhere.
[11 foods you have to try in Turkey's Black Sea region, 4 February 2016] 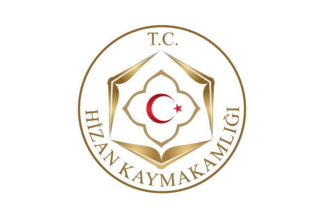 Flag of the district government - Image by Tomislav Šipek, 20 September 2017