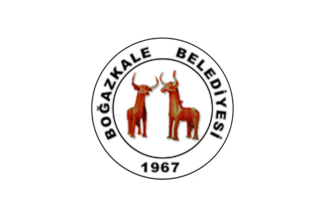 Boğazkale is the site of the ancient town of Hattusa, the capital of the first Hittite kingdom (1750-1200 BC). Settled around 2000 BC by the mysterious Hatti people, Hattusa was burned down around 1700 BC by the Hittite King Anitta, who promised revenge by the Stormgod against anyone who would resettle the place. The curse did not prevent a new ruler, Hattusili I, to proclaim himself King of Hattusa. The fortified town and its outskirts counted a population estimated to 40,000 to 50,000. The Hittite state and the town of Hattusa were destroyed around 1200 BC by the Phrygians, as part of the Late Bronze Age Collapse.

The flag of Boğazkale (photo) is white with the municipality's emblem in the middle. "Belediyesi" means "Municipality".
The emblem of the municipality features two ceremonial vessels (rhytons) in the shape of a team of sacred bulls made of baked clay, called Hurri ("Day") and Seri ("Night"); of 90 cm in height, the artefacts are dated to the Hittite Old Kingdom (16th century BC). They are exhibited in the Museum of Anatolian Civilizations (Ankara) (photo).